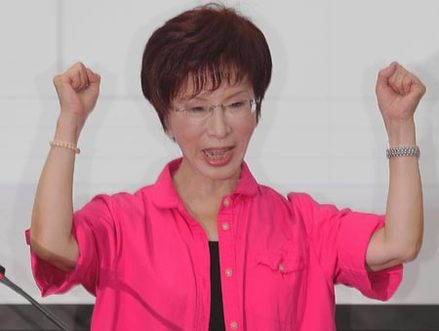 Hung's nomination, which still needs to be approved at a party congress on July 19, generally viewed as a formality, will see two women vie to become the island's next president -- potentially paving the way for its first female leader -- after the main opposition Democratic Progressive Party (DPP) named chairwoman Tsai Ing-wen as its candidate in April.

"The KMT Central Standing Committee approved the proposal for the nomination of Hung Hsiu-chu as the presidential election candidate," the party said in a statement at the end of a regular committee meeting.

"Party chairman Eric Chu said that from now on, the KMT think tank must mobilize themselves to help comrade Hung work out a campaign platform that can benefit the people and win over their support... Also the party will help Hung set up her campaign team."

The nomination of the teacher-turned politician ends a struggle by the Kuomintang (Nationalist) to find a presidential candidate after an embarrassing defeat in the November local election, seen as a barometer for the presidential race.

Political heavyweights including KMT chairman Chu and parliamentary speaker Wang Jin-Pyng displayed a lack of desire to stand in the election, prompting Hung to apply for the party nomination in April. At the time she was seen as a long shot.

"I don't see any likelihood that the nomination could be overthrown in the party congress," a KTM party official told AFP.

Hung told media that President Ma Ying-jeou said he was surprised by her performance when they met on Monday.

But challenges stand ahead of Hung as some KMT politicians say they fear that as an advocate of "one China", Hung could scare away voters who are worried about China's growing influence on the island.

The slowing economy, skyrocketing housing prices and a widening gap between the rich and poor will also weigh on Hung, analysts say.

President Ma, who has overseen a rapid improvement in ties with China since he became president in 2008, must step down in May 2016 after serving the maximum two terms.

But public sentiment has turned against his Beijing-friendly approach, as voters say trade deals with China have been agreed in secret and have not benefited the general population.

The Chinese authorities still consider Taiwan part of China's territory awaiting to be reunified by force if necessary even though the island has ruled itself since 1949 at the end of a civil war.