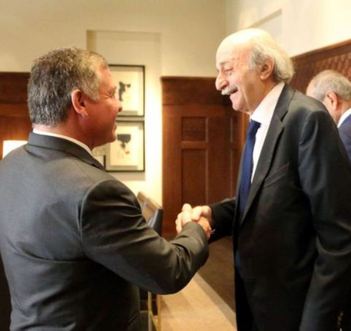 They “stressed the depth of the historic ties between Jordan and the Druze sect,” the agency said.

Talks tackled the Jordanian-Lebanese relations and means to strengthen them, it added.

The two men also discussed “the various challenges in the region and the efforts that are being exerted to confront the threat of terrorism.”

PSP spokesman Rami al-Rayyes has said that talks carried out by PSP officials in Turkey have led to an agreement to protect the minority Druze sect in Syria.

The delegation, which was led by Health Minister Wael Abou Faour, agreed with top Turkish officials and the representatives of the Syrian opposition on “certain measures” to protect the Druze, he said.

A rebel offensive in Syria and jihadist violence there have raised fears about the Druze minority's safety.

Earlier on Wednesday, rebels surrounded a government-held Druze village on the Syrian side of the ceasefire line on the Golan Heights after heavy fighting.

The advance came a day after Israel, with a significant Druze minority, said it was preparing for the possibility that people fleeing fighting might seek to cross to the Israeli-occupied side of the strategic plateau.

Last week, at least 20 Druze villagers were killed in an altercation with members of al-Qaida's Syrian affiliate al-Nusra Front in Idlib province in the northwest. The violence was described as a “massacre” by many Lebanese Druze and non-Druze leaders.

Shortly afterwards, rebels in southern Syria briefly overran a government air base in majority-Druze Sweida province, in their first such advance in the government-controlled region.

Anyone that fights for this murderous regime and anything except the cause of freedom is an ahbal.

Ah good old M8ers, when you oppose them and they set their sight on you, no vocabs book, no grammar book, no Greek book will suffice in their rants and insults of you. Now it's the Jordanian Monarch that is the subject of their worst verbal attacks, it's a shame to be honest as it reflects their locked state of mind, it was bad before but it only got worse recently. Good thing this wasn't a Chess table, the result and all the moves would have been so predictable.