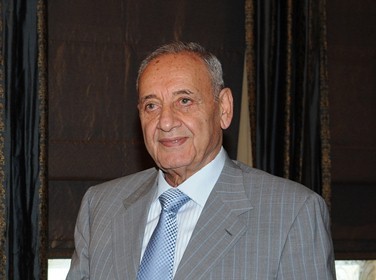 “I am not talking and not hearing,” Berri told officials who visited him in Ain el-Tineh.

“Ask me about Vienna,” he said, in reference to nuclear talks underway in the Austrian capital between Iran and the P5+1 group -- Britain, China, France, Germany, Russia and the United States.

The talks are aimed at ending a 13-year standoff by curbing Iran's nuclear activities in exchange for sanctions relief.

Berri's remarks were published in al-Joumhouria daily on Friday, a day after Salam and Foreign Minister Jebran Bassil, who is Aoun's son-in-law, argued after the FPM official took advantage of the presence of reporters at the start of the cabinet session and began talking about the violation of the Constitution.

The tension was accompanied by a protest by FPM supporters near the Grand Serail where the session was underway.

The demonstrators scuffled with Lebanese soldiers who stopped them from reaching the Serail.

As Safir daily said that Berri had asked the ministers representing him in the cabinet to remain silent throughout the session out of his keenness on supporting Salam and not confronting Aoun, who is allied with Hizbullah.

Berri's Amal movement is an ally of Hizbullah in the March 8 alliance that also includes the FPM and other parties.

“No one emerged victorious yesterday,” they said.

There are times when silence is golden, in view of the disaster that has struck Michel Aoun and his FPM party and partisans yesterday on Black Thursday, it would be most wise to stay mum.