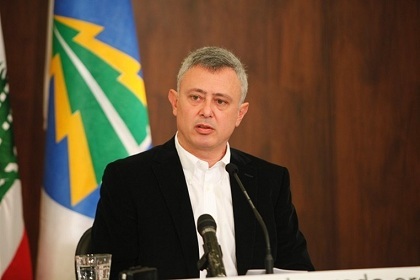 Marada Movement leader MP Suleiman Franjieh denied on Friday he was engaged in a row with the Free Patriotic Movement, but said he had different viewpoints with it on several issues, including a proposal to have a federal system.

“We don't have differences with the FPM,” Franjieh said at a press conference he held in Bnashii.

“We will continue to stand by (FPM chief MP Michel) Aoun as long as he is sticking to his policies,” he said.

“If we are consulted on a political program and convinced by it, then we remain committed to the FPM,” he stated.

“Had we been consulted” on Thursday's protests held by the FPM “we might have resorted to the streets with it,” the MP said. But “we did what suited us.”

FPM supporters marched towards the Grand Serail on Thursday but scuffled with Lebanese soldiers who stopped them from reaching the government house.

The tension on the streets took place as Aoun's son-in-law Foreign Minister Jebran Bassil argued with Prime Minister Tammam Salam during a cabinet session over the alleged violation of the Constitution and the infringement on the Christian president’s powers.

Franjieh stressed: “We want to preserve the authorities of the president and the dignity of the PM as well.”

Franjieh, who is a member of Aoun's Change and Reform parliamentary bloc, said the FPM chief is keen on the country's Christians and wants to give them their rights.

But he stressed that Aoun should resort to dialogue to achieve a solution.

Franjieh also rejected a proposal made by the FPM to have a federal system. “We can't tell our partners in the country that we no longer want them.”

“Federalism would make the situation much worse,” he said.

"I hope this was a slip of the tongue," added Franjieh.

Meanwhile, Progressive Socialist Party chief MP Walid Jumblat telephoned Franjieh “to thank him on his stance, which falls in favor of protecting stability and Lebanon's unity,” said a PSP statement.

Jumblat, a centrist, “stressed the importance of intensifying contacts between the different parties at this difficult stage,” it added.

Frangieh thankfully is not totally myopic, he knows when to distance himself from someone who is totally deranged, always mad, angry, furious, irresponsible, dictate and reckless. Frangieh knows when an ally becomes a liability, a serious liability and an impediment to his constituents' existence, so though he doesn't move as fast as Jumblatt, but at least when he does a U turn it means exactly that, a change of directions, to somewhere a lot saner. People like Frangieh should start buying Petit Fours, Chocolates and Flowers soon, when they plan to visit the Maridman when they move him to Deyr El Salib. Quite possibly they'll have to make provisions for more courtesy visit gifts to cater for the Maridman's sons-in-law, whom obviously have also bitten the orange bullet.

Troll ya troll, khallik hown 3ala toll. At least if you can't change your IPs, bass change your tune, lenno chwaye.

Just now on TV, Frangieh giving his views on what Aoun and his FPM have done. It is not only clearing up his position on the whole issue, but more than that, it's a total lambaste of Aoun and his madness. Now ya Naharnet, do not delete my post, and for this weekend, don't go to eternal sleep, you are not earning your salary honestly. Busy yourselves with the trolls as that would be a good start.

phoenix... this troll who is making tens and tens of accounts to insult almost every poster has managed to delete all reasonable posts on almost every article. I think he just presses the report button 100 times for all our comments. He gets deleted/banned in the end but he also gets our comments deleted. This is a really bitter sick individual.

(1). I know dear Justin, the trolls have detected the automatic deletion of Naharnet. It is a dirty game they are playing, and it definitely calls for the Mods to be a lot more vigilant. Normally it takes many presses on the report button to trigger deletions, so what the yellow/orange trolls are doing, is to create many fake accounts and report our posts. I am saddened that the Mods are not looking well into the matter, they should see it when many fakes accounts are created, and they can see which IPs are doing it.

(2) Justin.
I know some people in their HQ administration offices in Downtown, as I know the very owners as well, I will make it my duty to personally report the matter to them ASAP. If the M8 trolls are trying to muzzle our voices with this new trick, or to derail the spirit of free expression, then I will not let them do it. These cowards killed Gebran Tueyni, they will not stop his mission, people like me will make sure of that.

phoenix the moderators are not reading the comments before deleting them. What remains are mowaten's and mystic's comments with 20 votes each;)

So it seems Justin, but in all fairness, the Mods returned back the posts that were deleted.

Iamshit, if you have noticed many other M8 posts have been deleted for derogative language, but if my posts disturb you, no one is forcing you to stay except your hatred of people like me. Try going to the beach and relax, it's Saturday, beautiful sun, gulp a few beers, enjoy the view of your Chadorettes, life is short.

@bid3ajdidi. Your fould mouth is so unfair to Mowaten and Mystic, they won't like it.