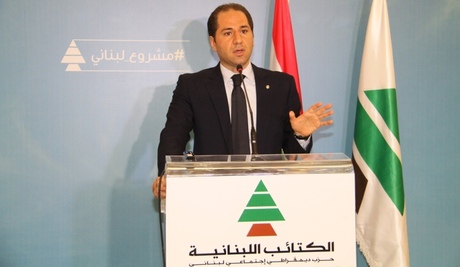 Head of the Kataeb Party MP Sami Gemayel stressed on Monday that the cabinet will be facing a “test,” during its extraordinary session on Tuesday, if "the obstruction by some of its members continues."

He declared in a statement after the party's weekly politburo meeting: “We see no point in remaining in cabinet if the obstruction continues in tomorrow's meeting.”

The cabinet is scheduled to convene to tackle waste management tenders that were announced earlier on Monday to address the country's protracted garbage disposal crisis.

“I have relayed the Kataeb Party's position to Prime Minister Tammam Salam and former President Michel Suleiman, whom I met earlier on Monday,” continued Gemayel.

“We will facilitate decisions at cabinet because it is not acceptable for some sides to keep on paralyzing the country,” he added.

“The people cannot be forced to pay the price of such tactics,” he stated.

“We cannot act as false witnesses to practices that are crippling the cabinet,” the lawmaker said.

Addressing the civil society demonstrations that were held over the weekend over the waste disposal crisis, Gemayel said: “The rallies gave us hope that there is a drive for change in Lebanon.”

“We consider ourselves part of those people who are raising their voice against the current situation in Lebanon,” he stressed.

He voiced his support for the civil society campaign, urging it to continue its peaceful demonstrations and be wary of attempts to veer it off its course.

He remarked however that the resignation of the cabinet will not achieve the civil society's demands for a system change in Lebanon.

“Such a change starts with the election of a president, the consequent resignation of the current cabinet, eventual adoption of a new parliamentary electoral law, and the staging of the polls,” explained Gemayel.

“What is the point of the resignation of the cabinet if the same electoral law will ensure the election of the same political class?” he wondered.

“Accountability can be achieved through a new law” and the election of new political figures, the MP noted.

“Change can only be achieved through state institutions,” he stressed.

Cabinet will convene on Tuesday morning to address the trash disposal tenders.

Violence erupted on Sunday during a protest of the “You Stink” campaign that was demonstrating against Lebanon's waste disposal crisis and prolonged political deadlock.

It had held two demonstrations over the weekend.

Sunday's protest took a violent turn, which the campaign blamed on “political thugs,” who started fighting the police deployed at the scene of the protest at Riad al-Solh Square in downtown Beirut.

The campaign pulled its supporters off the streets once the unrest erupted.

The thugs tried to tear down a barbed wire fence separating the crowds from the Grand Serail and threw molotov cocktails on security forces.

The Internal Security Forces stated Monday that 32 rioters have been arrested.

Resign now, houkoumet tesrif a3mel and stop trying to frighten us with cahos.
Houkoumet tasrif a3mel, intikhab ra2is, houkoumet technocrate, new election law as only task for this rotten parlement and then the new parlement will be able to change things...
Ennough pretty worlds, enough covering up one another, we have passed all ur fights with aoun and co. now enough, resignation, now....

just a thought: whatever new electoral law is put in place, do you think anything will change... do you think Hariri, Junblatt, Franjieh, Aoun, Berri, and Hezbollah will not be elected. It is naive on our part to think anything will change. Aoun is lobbying for a different law every 4 years thinking he can garner more MPs which would give him more control and more obstruction.

Maybe it will not be a revolution, but when people can achieve something even if it is not ideal it will be alreaddy a start..
Maybe with a new electoral law some new blood will arrive to the parlement with new ideas and then they might make a big difference..
I know that it wont end up with a souvreign secular democratic fair country, but at least it will be a step forward...

If u give them a real alternative, woth a real chance to succed u will see them change their votes, some of them got beatten during manifestations, hachem salman died, their are a lot of shia that are waiting for a chance..

@Justin
I fully agree with you because there are so many stupid and enslaved Lebanese and croonies who will vote for these long time feudal corrupt leaders. The ideal is to round them up , hang them after recouping the billions of Dollars they stole from the state coffers

Gemayel: We have stressed the need to alter the political class in Lebanon, as well as change its system.

I like Sami but he is part and parcel of this political class.

Another retard from the orange tribe...
What contribution did u bring to the discussion??

The "You Stink" organizers should take advantage of the momentum they gained and try to set up a new party with fresh faces and cross-confessional leadership. I bet you they win some seats in the first elections, then, if they prove themselves to be clean and fair, all the Lebanese will see through it, and will vote them in mass in the next elections.

I was all for this demonstration when it started. However it did not turn out to be what it was supposed to be. The 'demonstrators' are not calling for the election of a new president but the resignation of the government. Clearly a Hezbollah-Aoun agenda. People just realized they were fooled. Notice the demonstrators put up the pictures of all politicians and public figures and held them accountable except for Nassrallah; who by all accounts is responsible for the misery Lebanon is living in.

Hello everyone. I just joined today after being on the Daily Star which is a crappy site! Now they want you to pay to read their stuff online when it is free on all the other sites!!

Anyway, I just have a suggestion that I have not seen anyone suggest so far since I've been reading all your comments for the last month or so.

Why doesn't the army take over and kick out all these losers from parliment? I think this will solve the situation at least for now. If the army stands with the people, they can take over easily. Plus the people in the Army should be sick and tired of living in these conditions anyway, so they shouldn't defend these politicians but rather stand with the people (for example like in Tunis).

What do you guys think? Will it work?

Dear Mazen
Your suggestion is certainly valid and does make sense but not in Lebanon. May I remind you that our army is also divided along sectarian lines and more importantly our military leaders are as corrupt as our politicians. I feel it is time and I pray to God that this popular movement will expand and gets a strong popular boost and ultimately replace these crooks and retards with new educated civilized blood. A lot of educated Lebanese are serving foreign countries due to the lack of opportunities in Lebanon. Removing the actual leaders will certainly induce a lot to return home

Thanks. Yes I know the army is divided, but I wish they can come together as one without any religion involved! I also hope like you said the movement will expand and replace all these crooks. It's sad that the educated Lebanese have to leave their country because of these bastard politicians!!

No I didn't mean as a dictatorship. Of course I want Lebanon to be a democratic country. I always get angry at people in Lebanon and tell them that we need a democracy!! What I mean is that for the Army to take over for now so we can get rid of these crooks (all of March 14 and March 8), and then hold elections lets say next year to elect a new civilian government with fresh people (none of the current politicians are allowed to run). Maybe only run away:) But I know it won't be easy for all that to happen.

Why would YOU STINK wait till Saturday for their next action? Move now before the kingdom of corruption closes you down. No movement can start something then go on vacation. The citizens need a kick in the butt and a reminder to get along, Parliament on the other hand needs to quit sucking off the public and stop pimping out the little people, and put religion aside.