Al-Nusra in Syria Takes Last Regime Base in Idlib 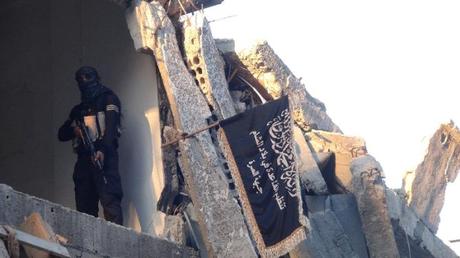 Al-Qaida's Syrian affiliate and its allies seized the last regime-held military base in northwestern Idlib province on Wednesday, in the latest setback for President Bashar al-Assad's forces.

Al-Nusra Front and a coalition of mostly Islamist groups captured the Abu Duhur military airport after a siege that lasted two years, the Syrian Observatory for Human Rights monitor said.

"After a violent attack that had been taking place since Monday, Al-Nusra Front and some Islamist factions control all of the Abu Duhur military airport," the Britain-based Observatory said.

The attacking force began to enter the base on Tuesday night.

Observatory chief Rami Abdel Rahman said the forces appeared to have taken advantage of a massive sandstorm that blanketed much of the Middle East and made it difficult for regime aircraft to carry out strikes.

"The army is no longer present in Idlib province," he added, saying that the soldiers who had been defending the base withdrew towards Aleppo province in the east.

"The regime's only presence left in the province is in the Shiite villages of Fuaa and Kafraya," which are besieged by rebels and are being defended by pro-regime militias and Hizbullah, not the army.

Syrian state television effectively acknowledged the loss, saying troops had left the base.

"After fierce fighting at the Abu Duhur airport, the army, which defended the airport with great courage under total siege for more than two years, abandoned their positions," the broadcaster said.

Abu Duhur has long been a target for opposition forces in the northwestern province.

Rebel forces had seized the entrance to the airport and several positions on its outskirts in late August in an advance that began with suicide bombers on motorbikes.

The airport's capture is the latest success for a coalition of Islamist and jihadist forces, including Al-Nusra, that calls itself the "Army of Conquest".

They first shot to prominence with the swift overrunning of Idlib's provincial capital in March.

They have since extended their gains throughout the province, seizing a string of strategic towns and even pushing into neighbouring Hama province, where they are fighting to capture the Sahl al-Ghab area.

With Abu Duhur's fall, the regime's only remaining presence in Idlib is in Fuaa and Kafraya.

Both are now completely surrounded by rebel forces, who have fired hundreds of rockets at the Shiite-majority areas.

The loss is the latest setback for Assad's forces, which the embattled president acknowledged in July were suffering from "fatigue".

"There is a lack of human resources" in the army, Assad said in the remarks after a string of defeats in Idlib province and elsewhere.

"The problem facing the military is not related to planning but to fatigue."

Assad's regime has been at war with different rebel groups for the past four years, in a conflict that has so far killed at least 240,000 people.

The conflict began with anti-government protests but descended into a war after a regime crackdown on dissent.

It has evolved into a complex multi-front battle involving rebels, jihadists, the regime, Kurds and a U.S.-led coalition that is carrying out air strikes against the Islamic State group.

An excellent step forward for democracy.

Idlib is salafi land. Now that whole province is free to bomb into oblivion.

March 14 wahabis should not be too happy.

I am surprised that you have not admitted yet it is a martyred iranian jihadi terrorist family in your avatar?

never knew you had a violent streak in you mystic... or is it frustration that is surfacing?

Violent streak? This is the internet. Now real life is a whole other matter, if you indeed see me as violent here.

Mystic - you are a monster. Not much different than the Zionist monsters that call for bombing the Jihadi Dahiye into oblivion. And you sad pathetic boy, words do have meanings. Supporting war crimes and genocide as you just did makes you partly responsible.

you call that a political opinion, mowaten?

How many posts shall we expect from you today mowaten? Who pays you to post and for what purpose? Are you and nasir qandeel related? I want answers

mowaten
I thought i told you I'd ring you when I needed a doorknob's opinion, who let you out of your cage?

How about the Yemeni civilians being slaughtered by the Gulf wahabi coalition? We do not see you people or the whole world care about that at all.

You people do not even consider Yemenis as human beings, so why should I drop tears when your cursed takfiris gets bombed?

Mystic - Tell me one person here who called for bombing a region in Yemen to oblivion!!! Rather than be ashamed of the sick statement you made, you double down!!!

Are you blind? Go look at every single article on Naharnet regarding coalition strikes on Yemeni civilians in Sanaa etc.
Or the suicide bombings on mosques.
Then you will see your friends cheering it.

Mystic - I have never read anyone of 'my friends' calling for bombing whole areas into oblivion and those who do are not my friends. You do not see how sick your logic is: 'I am an idiot who support war crimes and genocide because others do!!!' Walk back your statements and stop digging further.

Cry me a river Arab.com, you know aswell as I do that this is true about your clique.
Now I will not take back any of my words. So you are wasting your time.

Mystic last stand: 'I am a genocidal maniac and I am sticking with it because I neither have the morality or brain to walk back some stupid comments'

Even if you are 18 mars, how can you rejoy when Nusra win a battle ?? Are you aware that they murdered and kidnapped our brave lebanese soldier ?????

yes alex i am aware

lol that's a very old one eagleyawn. how long have you been preciously collecting my comments? do you frame them and keep them over your bed?

wow, can you get any lamer?

does this mean no more touristic flights taking off from and to Idlib? What a shame.....

"There is a lack of human resources" in the army, Assad said in the remarks after a string of defeats in Idlib province and elsewhere.
But bigjohn and mowaten said 95% of sunnis in Syria support Assad and will offer their lives for him. How come?

hello @lebjack
You might not know me. I like to introduce myself. I am a friend of flamethrower and I post on his behalf whenever he asks me too. I have a question for you: do you know why he was banned?

we are also friends of flamethrower and have the same question for you @lebjack.

hit them ya bashar hit the vermin's head;)

but there are no civilians in Syria let alone Idlib @lebjack. Just ask mowaten

No there isn't because all the civilians seems to be heading to Europe.

BigJohn, once the root and cause of the problem is gone, then the international community along the Arab countries will work together to come up with a solution (whatever that might be) that will be suitable for everyone.

I am one non-wahabi M14 who is not happy. I always contended that Nusra/HA/Assad are all evil. So victory of one over the other is nothing to be happy about. The life loving civilians are the ones running away with their families to secure a better life. God help the innocent lives.

I agree with bigjohn. He knows what we want because we always tell him what we want. He speaks to most syrians when he visits tartous every january.

Some of those refugees are ISIS and Nusra too, so karma hits Europe back on the head, after sending all those takfiris to Syria.

more refugees for the world

bigjohn is right. He interviewed me in Hungary and I told him that 95% of sunnis are with assad and 99% of the refugees hate nusra more than the regime.

You are a good guy john, but don't be naive.
Yes you are right many of those real refugees needs help, we have more than 2 million in Lebanon, many of them came into Arsal as refugees and they turned out later to kill and capture LAF servicemen.
Same thing is happening in Europe now, many reports suggests than ISIS have been infiltrating appearing as poor refugees. It's not cheap to go to Europe by the way, it costs a fortune to be smuggled overthere.
Most of the real hurt refugees are in the nearby areas, not Europe because they have no money to travel.

I have no problem with it, Europe asked for this when they supported those savages against Assad to begin with.