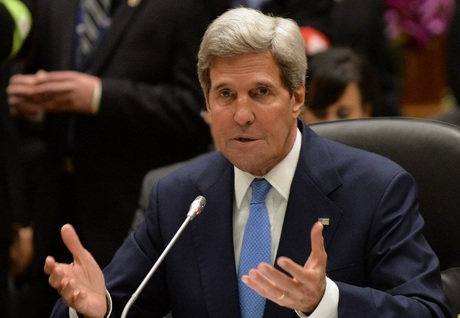 Russia wants talks with the U.S. military to ensure their forces do not come into conflict as it continues its build-up in Syria, Secretary of State John Kerry said Wednesday.

Washington has expressed concern about Moscow's growing military support for the Syrian regime, even as it conducts its own air strikes against Islamic State rebels in the country.

"The Russians proposed in a conversation I had today, and in the last conversation specifically, that we have a military-to-military conversation and meeting," Kerry said.

"So we are currently evaluating. The White House, the Defense Department, the State Department are discussing the next steps in order to determine the best way forward."

The United States suspended military-to-military dialogue with Moscow in March 2014 after Russian forces were accused of intervening in support of separatist rebels in Ukraine.

A Pentagon official said the U.S. military has no immediate plans to reopen ties but that "senior leaders continue to have the discretion to communicate with their counterparts as necessary."

The United States is open to any ideas Moscow might have about taking the fight to the IS group, but has warned Russia that its support for Syrian President Bashar Assad is counterproductive.

There is no question of Russia joining the U.S.-led coalition of mainly Western and Arab powers bombing the jihadists while it is still protecting its ally in Damascus.

Although Assad's forces oppose the jihadists, the West and its allies blame him for persecuting his own people and triggering the civil war that has allowed the IS group to thrive.

Russia's President Vladimir Putin has, however, insisted he will continue to protect Assad from his Islamist foes and a Russian arms build-up has been seen at a Syrian air base.

Kerry said any military-to-military meeting would be "to deconflict with respect to any potential risks that might be run" -- in other words to prevent the forces from running into one another.

"And it is vital to avoid misunderstandings, miscalculations, not to put ourselves in a predicament where we're supposing something and the supposition is wrong," Kerry said.

Washington, he said, would also seek a "complete and clear understanding as to the road ahead and what the intentions are," but he had no new talks date to announce.

"But the secretary was also clear that, if it's true that Russia is only focused on ISIL, then there is the possibility for cooperation."

Speaking a day after a telephone conversation with his Russian counterpart Sergei Lavrov, Kerry also again warned that Moscow's support for Assad could escalate the conflict.

Syria's bloody four-year war has claimed more than 240,000 lives and triggered a massive exodus of refugees.