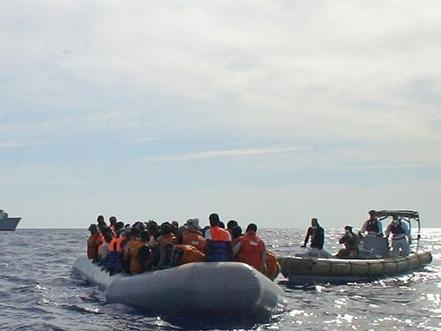 A British-drafted resolution aimed at scaling up European military action against migrant smugglers off Libya's coast has run into opposition from Venezuela and African countries at the U.N. Security Council, a senior diplomat said Wednesday.

The measure would allow European forces to inspect and seize ships in international waters as part of efforts to stem the flow migrants making the perilous journey across the Mediterranean to reach Europe.

Britain had hoped to put the draft resolution to a vote in the Security Council this week before world leaders arrive for the annual UN General Assembly gathering, but the senior diplomat said that was now uncertain.

Europe's migration crisis looms large over this year's gathering of world leaders at the United Nations and a meeting has been called by Secretary-General Ban Ki-moon on September 30 to ramp up the response.

The draft text obtained by AFP was drafted under chapter 7 of the U.N. charter which allows for the use of force, a provision that the African countries and Venezuela oppose.

The measure would authorize European naval forces to board ships for inspection, seize them and even dispose of the vessels suspected of being used by migrant smugglers.

Europe hopes that smashing the refugee-trafficking networks will help save lives and deter asylum-seekers from making the dangerous journey.

More than 350,000 people have risked their lives crossing the Mediterranean this year, according to the International Organization for Migration, with nearly 3,000 losing their lives.

The text circulated to the 15 council members last week would authorize action on the high seas for a period of one year and would be limited to international waters off Libya's coast.

After raising some objections to the chapter 7 provision, Russia agreed to support the measure that includes specific language on the use of force.

"Our indications are that the Russians are on board and that Venezuela is not on board and will never be," said a senior Security Council diplomat.

"The issue is the three Africans," he said, referring to Security Council members Angola, Chad and Nigeria.

The African countries oppose U.N. authorization of use of force and have complained that the text is "overly Libya-centric," said the diplomat.

Libyan authorities have made clear they oppose European military action that could fuel instability on their territory.

With no threat of a Russian veto, the draft resolution could still be adopted with the support of the 11 other members of the Security Council, but Britain has yet to decide on whether to move forward.

The UN resolution would help Britain, Germany and other European nations whose navies operate in the Mediterranean under national legislations that do not authorize military action in international waters.

The EU's NavFor Med force currently comprises four ships -- one Italian, one British and two German -- and it will likely need several more vessels for the mission to patrol the Mediterranean.

"We are trying to do more and people are dying still," said the diplomat, who asked not to be named.

The Security Council had initially hoped to adopt a resolution authorizing action on the high seas and in Libyan territorial waters.

But that measure hit a wall when Libya's authorities declined to give the green light because the internationally-recognized government does not control the coastal territory.

The text calls upon member-states to inspect any unflagged ship, "including inflatable boats, rafts and dinghies," and allows inspection of flagged vessels with the consent of the flag state.