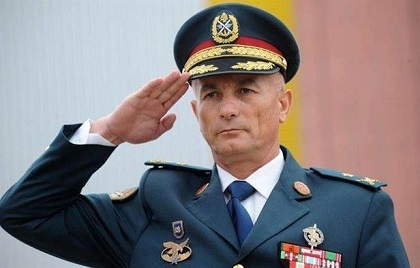 Earlier, LBCI TV and the Akhbar al-Yawm news agency also said that Qobayati has been appointed as a successor to Roukoz, quoting “military sources.”

Qobayati is currently the regiment's deputy chief and the commander of its first brigade, according to Akhbar al-Yawm.

“He took part in the Abra battles and was wounded in the Nahr al-Bared clashes,” the agency said.

Hopes have dimmed on the possibility of the rival political parties reaching a settlement on the promotion of several officers ahead of Roukoz's retirement on October 15.

Change and Reform bloc chief MP Michel Aoun had been hoping that the promotion of Roukoz, his son-in-law, would keep him in the military and make him eligible to lead the institution.

Sources close to Aoun have blamed the ministerial bloc loyal to ex-President Michel Suleiman for the deadlock on military promotions.

Brig. Gen. Chamel Roukoz'problem is his father in law. He might be an ideal candidate to lead the army, (I don't know anything about that, just saying "might be"), but his father in law surely destroyed his chances.
Aoun is a disaster. So is Bassil. They both are famished for power and money and lack any integrity, intelligence and manners.

The only thing I know about Roukoz is that he is a tough one and as much a hero as any moghwar under his command. He looks good and organized interesting sports events. He surely is more qualified than his decripit father in law or his joke of a adeel, Basseel.

machia, maybe it is true, but there are at least 15 more senior christian officers ahead of him.

anyone can explanation this, gen. roukoz is retiring in a few days and the commando regiment needs a new commander. it's the way proper armies work. someone should explain that to aoun, even after all these years he's still to understand the way promotions work.

Actually troll, Aoun is easily bought just ask Assad and Nasrallah, they paid what he asked and got his eternal loyalty going against all his previous stances. But in this case Kataeb and Sleiman's ministers refused to pay Aoun's asking price as published in yesterday's Al Akhbar newspaper ie fast tracking the promotion of three or four officers including the more junior Roukoz ahead of 19 Maronite and over 40 belonging to other sects more senior officers. Aoun just over estimated his own value and priced himself out of the market. Some were just not interested in paying that much to buy such worthless item.

If Chamelle was NOT the son-in-law and NOT a member of the Party would he had received this attention????

Roukoz was burnt by Aoun???
I don't think so. He is made well known now and ready for a political role. He was able to finish this division in Lebanon by one word from him saying that he is out of the equation. But no, he preferred to keep silent because he knew that he is a winner in all case scenarios. Opportunity like this is not for everyone (only for SIL).
By the way electing Roukoz for presidency can solve lots of problems. After all he is clean, courageous and didn't desert his soldiers. He could be the one to tell Aoun it is time to calm down without being dictated by any party.

That's ok. Qbayati is more of a Aounist than Roukoz
Michel Aoun will be king maker for president and Roukoz will be the one