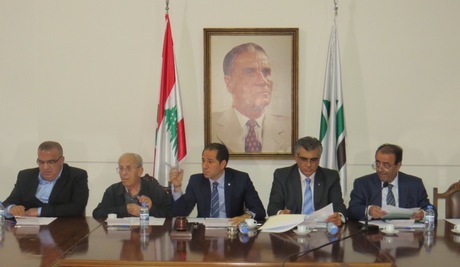 The Kataeb Party declared Monday that it will hold Prime Minister Tammam Salam responsible should he “bow to the boycotters' will” and “fail to call a cabinet session.”

“Amid the deteriorating economic situation, the aggravating garbage crisis, the school tuitions crisis, the other social and developmental junctures, and the Syrian refugee burden … the obstruction of cabinet sessions becomes a crime against the Lebanese whose responsibility falls on the shoulders of the boycotting camp,” said the party in a statement issued after its political bureau's weekly meeting.

“On the other hand, failure to call a cabinet session would be surrender to the will of the boycotters, whose responsibility would fall on the prime minister, who is liable towards the aggrieved Lebanese people,” it added.

Kataeb also stressed that the national dialogue sessions are aimed at “facilitating the election of a new president, not replacing the government.”

Speculation was rife last week that the cabinet would convene on Tuesday in order to tackle the garbage crisis, but no session has been scheduled until the moment.

The government's work has been paralyzed in recent months amid a dispute with the Free Patriotic Movement of MP Michel Aoun over its decision-making mechanism and the thorny issue of military and security appointments, which has prompted a boycott by the movement's ministers.

Aoun announced last week that his ministers would not attend a cabinet session aimed at tackling the garbage crisis even though he supports Agriculture Minister Akram Shehayyeb's proposal to solve it.

Caporal chances are below zero...goodbye caporal!

The so-called "black report" against the Batrak is firing back!!