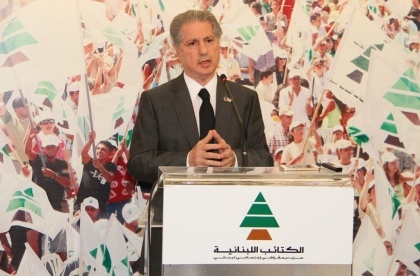 Former head of the Kataeb Party Amin Gemayel reiterated the party's decision to boycott the upcoming legislative session, saying that it will remain committed to the constitution, reported al-Joumhouria newspaper on Monday.

He told the daily: “If the same efforts being exerted to hold the legislative session had been made to elect a new president, we would not have become embroiled in such an endless political debate.”

The Kataeb party is still committed to its position on the legislative session, he stressed.

“The election of a president is key to resolving all crises and ending the useless debate that violates all constitutional norms,” he remarked.

In addition, he warned that the ongoing efforts to hold a legislative session “pave the way to creating bizarre norms that contradict the constitution and lead us towards chaos.”

“No one can predict the dangers of such a precedent,” Gemayel continued.

“We have heard numerous strange explanations of the constitution, which can only be deemed as novelties,” he stated.

“The most prominent of such novelties is the so-called legislation of necessity,” he noted.

“Given the paralysis of state institutions and the presidential vacuum, who has the right to deem what is necessary and what isn't?” he wondered to the daily.

“One of a president's most important roles is studying laws and determining how much they adhere to the constitution,” Gemayel added.

"There is an economic threat and legislation is necessary but the solution is to press the 40 MPs who are boycotting sessions to head to parliament to elect a president," he said.

The lawmaker noted that "the responsibility falls on those who are impeding the work of institutions, not on those who are seeking to implement the Constitution and who are attending sessions aimed at electing a new president."

"The roadmap is clear -- the election of a president, the formation of a new government, devising an electoral law and holding parliamentary elections," he underlined.

The Kataeb Party had on numerous occasions voiced its rejection to attending a legislative session in the absence of a head of state.

Speaker Nabih Berri had scheduled a legislative session for November 12 and 13.

The Lebanese Forces and Free Patriotic Movement are also considering a boycott given that the session's agenda does not include the parliamentary electoral law.

Efforts are ongoing to persuade them to attend the meeting, amid fears that their boycott would cause the session to lose its needed quorum.

Kataeb are doing the right thing.

Why are some parties so afraid from parliament elections now ? In any country of the world, when things are stuck you go to the people and ask them to elect the new decision making body. Some insists that electing a President is the priority but which legitimacy this President would have if the majority of the Lebanese do not consider their MPs legitimate ?

Electing a President with current MPs will lead to extend the life of this current regime and majority that has lost legitimacy.