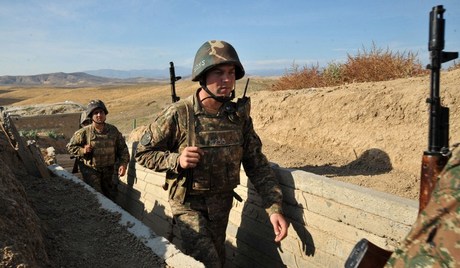 "On November 12, two Karabakh army servicemen were killed by Azerbaijani snipers at the southern sector of the Karabakh frontline," the rebel defense ministry said in a statement.

Armenia and Azerbaijanare locked in a decades-long conflict over Nagorny Karabakh, an Armenian-backed ethnic Armenian territory in Azerbaijan.

The two ex-Soviet nations regularly exchange fire along their shared border and across Karabakh's volatile frontline.

In a first since the 1994 ceasefire, both sides reportedly used large-caliber artillery in tit-for-tat attacks in September, raising the specter of a new war.

International mediators to Karabakh peace talks coordinated by the Organization for Security and Cooperation in Europe (OSCE) at the time "condemned in strong terms" the violence that caused civilian casualties, and called on both countries to "accept an OSCE mechanism to investigate ceasefire violations".

U.S. mediator James Warlick said last month that the two countries' presidents had agreed to meet "before the end of the year" and expressed hope that they "will defuse increased tensions".

Armenia -- backed by Russia, which sells weapons to both countries -- says it could crush any offensive.