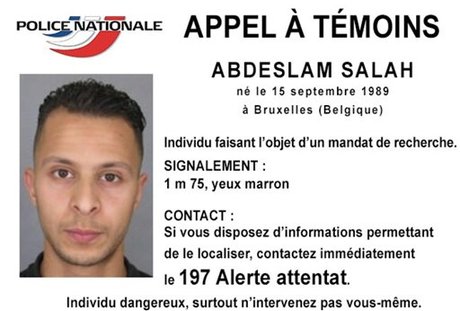 Belgium issued an international arrest warrant Sunday for one of three brothers linked to the brutal attacks in Paris that killed 129 people, as the probe spread across Europe.

As thousands gathered in central Paris in mourning and solidarity, authorities in at least five European countries scrambled to tie together leads and hunt down possible accomplices.

Security sources said one of the three brothers died in the Bataclan concert hall where the worst of the bloodshed took place, while another had been detained along with six other people in Belgium.

Seven gunmen wearing suicide belts died during the attacks, which have been claimed by the Islamic State group -- either at the Stade de France stadium, or in and around the Bataclan venue.

The sports minister said at least one of the bombers who detonated their explosives near the stadium had tried to enter the venue where France were playing Germany in an international football match at the time.

Prosecutors say they believe three groups of attackers were involved in the Paris carnage, raising the possibility that one group may still be at large.

It is now known that three of the suicide bombers were French nationals, but two of the men had lived in the Belgian capital Brussels.

Two cars used in the attacks were hired in Belgium. One was quickly found near the Bataclan venue, and one overnight on Saturday in the suburb of Montreuil east of Paris, with two AK47 rifles inside.

Witnesses said the second car, a black Seat, was used by gunmen who shot dozens of people in bars and restaurants in the hip Canal St Martin area of Paris.

The first attacker to be named by investigators is Omar Ismail Mostefai, a 29-year-old father and French citizen, who was identified from a severed finger among the carnage at the Bataclan, where 89 people were killed after heavily armed men in wearing explosives vests stormed into the venue.

Born in the modest Paris suburb of Courcouronnes, he had eight convictions for petty crimes but had never served a prison sentence.

"It's a crazy thing, it's madness. Yesterday I was in Paris and I saw what a mess this was," one of his brothers told AFP before he was taken into custody on Saturday night.

Belgian prosecutors said two of the attackers were Frenchmen who had lived in Brussels, at least one in the neighborhood of Molenbeek which has been linked to Islamic radicalism.

Premier Charles Michel conceded Molenbeek, a poor immigrant neighborhood known as a hotbed of radicalization, was a "gigantic problem."

Meanwhile, German authorities were questioning a man from Montenegro found last week with a car-load of eight Kalashnikov rifles, three pistols and explosives.

The man, who had been heading for Paris, has refused to cooperate with police.

The discovery of a Syrian passport near the body of one attacker has raised fears that some of the assailants might have entered Europe as part of the huge influx of people fleeing Syria's civil war.

Greek and Serbian authorities have confirmed the passport belonged to a man who registered as a refugee in October on the island of Leros and applied for asylum in Serbia a few days later.

But European Commission President Jean-Claude Juncker, who has urged EU countries to take in refugees, said there was no need for a complete review of the bloc's policies.

"Those who organized, who perpetrated the attacks are the very same people who the refugees are fleeing and not the opposite," he said.

Paris was plunged into three days of mourning as residents struggled to come to terms with the latest shock, 10 months after jihadists hit satirical magazine Charlie Hebdo and a Jewish supermarket.

Although much of the city was shut and the government had banned public demonstrations on security grounds, thousands flocked to lay flowers and lit candles at the sites of the violence.

By early evening, the Place de la Republique square was full of people standing in quiet solidarity while many more joined a solemn memorial at Notre Dame cathedral.

Meanwhile, outside the Bataclan venue, 38-year-old Herve came to pay his respects with his six-year-old son.

"We need to get out, you shouldn't stay at home," he told AFP. "You need to go out and look, get a feel for yourself of what happened."

The Islamic State group said they carried out the attacks that left a trail of destruction.

The group said they were acting in revenge for French air strikes in Syria and threatened further violence in France "as long as it continues its Crusader campaign."

President Francois Hollande has called the assault an "act of war" and vowed to hit back "without mercy."

Forensic teams were still scouring the Bataclan venue, where three attackers burst in shouting "Allahu akbar" (God is greatest) and sprayed gunfire during a gig by Californian band Eagles of Death Metal.

They are believed to have executed hostages one by one after rounding them up near the stage. Videos have shown terrified people scrambling out of a door and hanging out of windows to escape the violence.

As armed police stormed the venue, two gunmen blew themselves up, while the third was shot by police.

World leaders united Sunday to denounce terrorism at a heavily-guarded G20 summit in Turkey and observed a minute's silence in respect of those who were killed.

"We stand in solidarity with France in hunting down the perpetrators of this crime and bringing them to justice," U.S. President Barack Obama said after talks with his host, Turkish President Recep Tayyip Erdogan.

Russia's Vladimir Putin said overcoming global terror was possible only "if all the international community unites its efforts."

He is now in Hell. Not in Heaven. All warmongers have evil souls and will burn in eternal fires.

And guess ! Yes he is Arab and Muslim