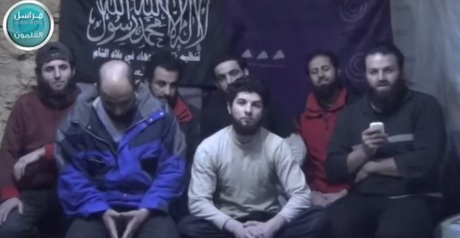 Negotiations to free the Lebanese servicemen who were abducted by al-Nusra Front suffered a setback on Sunday afternoon, after steps on the ground and media reports gave the impression earlier in the day that the exchange was imminent.

“Some obstacles emerged in the final moments but the negotiations have not stopped,” Qatari-owned Al-Jazeera television said.

“New developments have prevented the completion of the prisoner swap deal today,” it added.

The TV network had reported that “the Qatari-sponsored swap deal” would take place “within hours.”

The pan-Arab, Beirut-based Al-Mayadeen television said al-Nusra “increased its demands” in the past few hours and that “the fate of the swap deal is not clear anymore.”

The developments prompted Lebanese security forces to ask an aid convoy that had entered the northeastern border town of Arsal as part of the swap deal negotiations to return to Beirut.

A General Security delegation and a Qatari mediator also returned to Beirut, according to media reports.

It quoted a Nusra source as saying that "the Lebanese state has not honored its promise on supplying food aid to refugees in Arsal's outskirts."

"The other condition hindering the swap deal is failure to secure the evacuation of a number of wounded people to Turkey," MTV said.

General Security chief Maj. Gen. Abbas Ibrahim meanwhile reassured from a hotel in the Bekaa town of Chtaura that "negotiations are still ongoing" and that "the swap deal has not failed."

OTV had reported that efforts have “intensified” to overcome the obstacles that are hindering the deal.

For its part al-Jadeed said negotiations between Ibrahim and al-Nusra “have entered the final moments which will decide the fate of the deal.”

The General Directorate of General Security had earlier issued a statement saying all media reports that were circulated Sunday were “baseless, especially regarding the swap deal's conditions.”

It also reiterated its call for media outlets to “deal with this humanitarian and national issue professionally and responsibly in order to complete the process and make it reach a happy ending.”

Earlier in the day, media reports said that the swap deal would take place between the al-Masyada and Wadi Hmeid areas on the outskirts of Arsal.

Sky News said that the 16 Lebanese soldiers would “arrive at any moment at the outskirts of Wadi Hmeid.”

On Friday, media reports said that the servicemen would be released soon in a prisoner swap with Islamist inmates in Lebanese jails.

Ibrahim stressed on Saturday that the ongoing negotiations are serious but the efforts “have not yet reached their happy ending.”

He stressed the necessity to keep the issue away from media speculation.

The families of the abducted servicemen urged media outlets on Sunday not to disclose any information on the deal to help it reach to fruition.

Earlier on Sunday, reports said that security measures were taken between the areas of Baalbek and al-Labweh, paving way for an imminent release of the servicemen.

Voice of Lebanon radio (100.5) said that the army had closed Arsal's Wadi Hmeid and al-Masyada border crossings, a probable location where the swap could take place.

Al-Nusra sources had told al-Akhbar daily that the swap includes freeing inmates from Lebanese and Syrian prisons, and transporting some wounded people from al-Zabadani in Syria to Beirut's airport and then to Turkey.

The troops were abducted during deadly clashes in August 2014 between the army and militants from al-Nusra and the Islamic State group in and around Arsal.

Nineteen troops were killed in the fighting as 35 soldiers and policemen were taken hostage. Al-Nusra later released seven security personnel who were in its custody.

The two groups later executed four servicemen and were threatening to kill more if Lebanese authorities do not fulfill their demands.

Sayyed Hassan, Abbas Ebraheem, Netanyahu and Qassem Sulaimani are the only 4 world leaders effectively working to release the kidnapped soldiers..... the rest pfffft.

Soon they will demand full control of Lebanon.

& according to M14ers, what is wrong with that?

So Al Nusra and other Takfiris are your direct competitors since you (Ebola) are working for the FULL CONTROL of Lebanon....isn't it so???

The takfiri groups keep on playing with the hopes of the families of the abducted soldiers, pretending to reach an agreement and coming up with some new way to disrupt it when it's near the end...
Seems they do not want to ever release the soldiers, these pretended talks are just a diversion and a way to gain time and keep the Lebanese side busy and hanging. In reality these half men need the hostages to use as human shields.

what are you on about ya troll? buzz off

well said Southern, even when you mix and match you still give a very clear analysis. Bravo