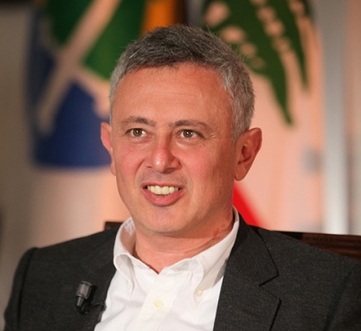 Marada leader MP Suleiman Franjieh received a telephone call on Friday from French President Francois Hollande in light of the political settlement that saw a possible nomination of the lawmaker for the post of the presidency.

It comes a day after a meeting between al-Mustaqbal movement chief Saad Hariri and Hollande took place in the French capital.

After the Paris meeting the French president stressed the necessity to end the vaccum in Lebanon, saying: “It is crucial that the presidential crisis ends.”

There has been a flurry of political talks in the country that followed a Paris meeting between Franjieh and Hariri.

The meeting sparked intense speculation that the two leaders agreed to the nomination of the Marada chief for the presidency.

Imagine being barely able to read or write and you receive a phone call from the French president while playing video games with your friends.

did Putin called him?

I only call General Aoun

You are the One! We love you Franjieh; Aoun eat your heart out. Zgharta is the new capital of Lebanon.

well only Hakim n General will decide on that ;)

I am no longer the highest educated celebrity in Lebanon.

Definitely a serious candidate for this year's Prize!

Did Hollande speak with Franjieh in French?

The general of Generals and Idi Amin are the only 2 generals working for Lebanon's interests at the moment.... the rest pfffft.

Once again, it is clear than aoun cares only about himself and his family business.

endowed... that means distance himself from himself... it is absurd.

I told everybody that even Israel cannot fly over Lebanon or Syria because of the might Russian S400. I now feel stupid....... as usual.

Wonder if it was the other way around and our president is calling the French candidate to discuss the frech presidency. Will French people be as understanding as us? the mere fact that foreign intervention has become the accepted norm in Lebanon tells how politically immature we are. sickening and sad...

15 minutes later after having his son tony use google translator....