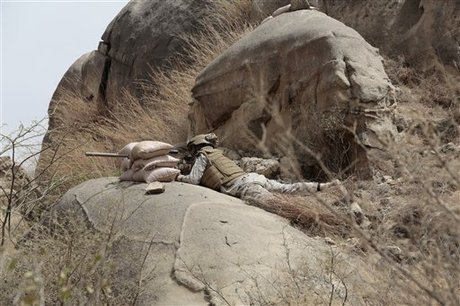 Saudi Arabia announced on Tuesday the formation of a coalition of Arab and Muslim countries aimed at fighting terrorism.

Lebanon is among the 34 countries in the alliance.

Prime Minister Tammam Salam welcomed the formation of the Islamic coalition, saying: “Lebanon is at the forefront of the confrontation with terrorism.”

“Any executive step required by Lebanon from the coalition will be studied and dealt with according to Lebanese constitutional and legal norms,” he added.

But the Foreign Ministry decried that it “had no knowledge whatsoever of the issue of forming an Islamic anti-terror coalition.”

It said it has not received “any memo or phone call mentioning this coalition.”

“The Ministry of Foreign Affairs emphasizes that this move undermines Lebanon's distinguished stance on the definition of terrorism and the classification of terrorist organizations,” it said.

“It also encroaches on the ministry's constitutional jurisdiction on foreign affairs,” the ministry added, noting that Lebanon's foreign policy “is part of the government's policy and the Ministerial Policy Statement – in coordination and consultation with the prime minister.”

There should be “internal consensus on this foreign policy,” the ministry stressed.

It also reiterated that it will always support “any real effort, action or coalition aimed at combating takfiri terrorism and all its organizations, as well as all its military and ideological forms.”

Earlier, Mustaqbal Movement leader MP Saad Hariri praised the coalition, saying: “This is a historic move on the right path, which is aimed at dealing with a political, security, and ideological problem that has started to pose a risk on Islam's civilized and human existence.”

“It was only natural for this announcement to be made from Riyadh, by its Deputy Crown Prince Mohammed bin Salman, who delineated the strategic line of this alliance,” he remarked in a statement.

“Saudi is announcing on behalf of the overwhelming majority of the Arabs and Muslims that the responsibility of combating terrorism, which is exploiting Islam to harm the religion, lies on them, their leaderships, and countries,” stressed the MP.

“This responsibility falls first on Arabs, who are falling victim to the ugliest discrimination campaigns that serve no purpose but to harm their role and stature in the world,” added Hariri.

On this note, he saluted the Saudi leadership “for launching the alliance and embracing it.”

Commenting on the coalition, Labor Minister Sejaan Qazzi said: “Lebanon is not part of this alliance and it was not informed about joining it.”

“Lebanon is not an Islamic or Christian state and joining the coalition needs cabinet's approval,” he added according to MTV.

“We hope an international alliance against terrorism would be formed instead of a sectarian one,” he told the television station.

Saudi Arabia announced Tuesday the formation of a military coalition of 34 countries including Gulf states, Egypt and Turkey to fight "terrorism" in the Islamic world.

The Saudi-led alliance does not include Iran, or Syria and Iraq.

It will be based in Riyadh "to coordinate and support military operations to fight terrorism", with participation from Middle Eastern, African and Asian states, the SPA state news agency said.

The coalition will tackle "the Islamic world's problem with terrorism and will be a partner in the worldwide fight against this scourge" said Saudi Defense Minister and Deputy Crown Prince Mohammed bin Salman.

Saudi Arabia against terrorism? How can the founder of terror fight it?

shameful to take part in that terrorist coalition. if saudis wanted to do anything about terror a good start would be to stop funding it, and stop spreading their fundamentalist version of islam by implating salafi mosques throughout the world.

One of the reasons that the Resistance should NEVER disarm.

Don't be too happy & cocky texas, you can hardly deal with the Ansarullah in Yemen as it is.

Saudis are going through a hard time, their oil prices are so low, that they almost gain nothing from it, they have even ordered American weaponry, with borrowed funds that the americans put on a tap.

Their economy will collapse when all their oil is gone, because Saudi Arabia is a desolate desert with a few high-end buildings, that can't provide with the simplest of things and goods which is water, food agriculture etc.
They have become so unpopular in the Western world alongside Turkey these days, that everyone knows that Saudi Arabia is a terrorist state.

Even the Ansarullahs tactics are too much for the Saudis to handle, one of their most senior commanders died the other day.
No texas, you have not dealt with the Ansarullah, they are dealing with you wahabi fellas right now.

Yeah sure texas, they will for sure take the wahabis hand and fight against their own people.

The same wahabis that bombed their neighbourhoods husbands, children and wives in Da7iye

Don't forget the mini skirts, while you are at it.

Hezbollah and its Iranian masters seem to manage just fine.

Maybe these sunni terrorists decided to commit suicide together with their fellow shia terrorists named Hizbullah.

Founder of terrorism is the militia that loaded the truck that hit the marines barracks 35 years ago...founder of terrorism are those that first hijacked planes and killed passengers....those are the ones that taught all fanatics what terror looks like...

The role of this coalition is not clear...how will it fight terrorism collectively and how will it coordinate its operations?

The coalition's first target, said its leader, KSA's deputy Crown Prince, will be the king of Saudi Arabia.

How has Lebanon joined the Saudi led Anti Terrorism coalition? How can Lebanon join an international coalition when there is no President? Under the Constitution, all international agreements can only be signed by the President of the Republic! How is Lebanon a member when at the same time the labour minister is quoted as saying Lebanon is not part of this Coalition?

"The 34 members all belong to the Jeddah-based Organisation of Islamic Cooperation." This is not part of the Arab Army formed in the Arab League. Even still, if both organisations agreed to this coalition, only the President of the Republic can ratify or even negotiate any international agreement! Point is this story headline is not truthful or even remotely accurate!

This is so Mickey Mouse. Gibran Bassil, the supposed Foreign Minister is so busy with family business, fending off Frangieh that he does not bother with his supposed Ministerial Portfolio as the Defense Minister then he cries foul when actions are taken in his absence.
Then there is Hariri who is more deferential to Saudi sensibilities than to Lebanese and he is supposed to lead the largest Sunni Party in the Lebanese Parliament.
If Lebanon had a government, it would be in disarray. But since it doesn't have one, it only looks that way.

did not know that lebanon is a muslim country ?

13,
Gibran saw it 100 years ago and it is so true for Lebanese and the Arabs in General.

Naharnet / Saudinet: Call it the way it is. In your title you missed labelling it an Islamic coalition, all the while the Islamic label was at the heart of the issue.
Your reporting is incomplete, at best. You sure must've graduated from Imam Mohammad ibn Saud university for journalism, with distinction.
To maintain transparency with the facts, a correction is required.

hey troll, your resistance is islamic so why object to an Islamic coalition or would you rather prefer a pure shia coalition.

Hahaha what a dysfunctional joke of a state. Shows how subordinate we are to the Saudis. They don't even have to notify us. All they need to do is ask Saad to bend down...