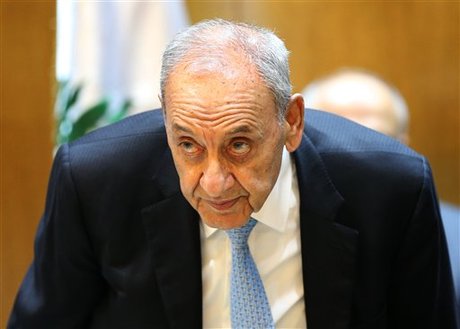 His visitors told the daily: “It is an honest nomination and his initiative is more than serious.”

Hariri has been leading efforts to nominate Franjieh as president as part of a greater initiative aimed at ending the political deadlock in Lebanon.

The main problem lies in the stances of Maronite figures, added Berri of the nomination.

The Christian blocs of the Kataeb, Change and Reform, and Lebanese Forces have expressed reservations over Franjieh's nomination.

“We were criticized for saying that the main hurdle is being posed by the Maronite forces, but reality has proven that we were right,” added the speaker according to his visitors.

“If the four main Maronite leaders do not reach an agreement over of a president, then we should search for a new figure,” he explained.

What a shame for the Christians who cannot agree among themselves...

Disagree, the fox (Berri) is distorting where to place the blame. The constitution does not stipulate for competing candidates to agree on one figure to be elected. It is like asking Nabih Berri and Ahmad el-Asaad and Mohammad Baydoon to agree on one candidate to be parliament t head. Or like asking Trump, Cruz, and other other dozen candidates to agree one one person to elect. The constitution simply directs the parliament to convene and vote for the candidates running for the job.

And who can force the MPs of Aoun and the Hezb to go to parliament to have a quorum? It is a sad day when most Muslim leaders in Lebanon are behaving like adults and Christian leaders are behaving like little children. Lebanon can only be whole again when a Christian president can lead the republic.

Why is that? Because according to you christians are the civilized ones? And then you say "lebanon can only be whole again when a cristian president can lead the republic". Thats a contradiction. As you can see, christians can't even decide on a candidate and im not talking about the maronite-orthodox rift, i mean the maronite-maronite rift.

I will try to get in Harriri's head and analyze:
1) Maybe he thought Franjieh is more reasonable and flexible than Aoun.
2) Maybe he thought Franjieh is wed to Assad and Aoun is wed to HA and that Assad will not last another year and Franjieh will become widowed and might fold into M14. While Aoun will have HA for backbone for decades.
3) Maybe he wanted to cause a rift within M8 knowing well that Aoun will not approve of Franjieh.
4) Maybe he just wanted to shake the tree and see what falls down.