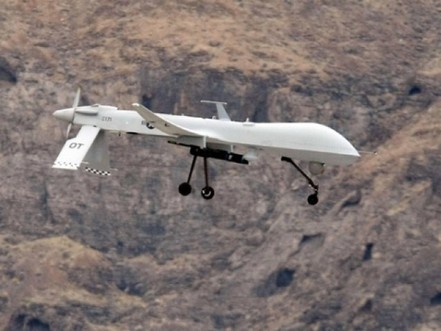 The raid targeted their vehicle on Tuesday evening near the border of Baida and Shabwa provinces, the official said.

Yemen, home to what the United States considers al-Qaida's most dangerous affiliate, has been convulsed by unrest since the Iran-backed Huthis seized Sanaa in September last year.

Al-Qaeda in the Arabian Peninsula (AQAP) has exploited the turmoil to tighten its grip on parts of southeast Yemen, including Mukalla, the capital of Hadramawt province, imposing a strict form of Islamic law.

Islamist militants, including AQAP and the Islamic State group, have also gained ground in and around the main southern city of Aden, where a Yemeni naval officer was shot dead overnight by unknown gunmen, security officials said.

Is this considered an excessive use of force? How is this different than Israelis killing stabbers or car rammers, which many HR organizations have criticized as excessive force if the Israelis killed are fewer than the stabbers.

Then you agree when it comes to stabbers and car rammers?

no comparable artuto, those you call "stabbers and car rammers" are not just that, and by using these terms you're deliberately omitting the real story. these "stabbers and car rammers" are the palestinians which you have disowned of their lands, massacred, tortured, humiliated and on which you committed countless war crimes and crimes against humanity and have been doing so for about 70 years. the stabbing and ramming is the natural result of everything you did to them, their parents, their families and their children. it's actually far, far less than you deserve.
you can kill one palestinian after the other, and try to give yourself good conscience by seeing only the last 5 minutes of their lives and judging based on that, but as long as you do not face the reality of the life of suffering and misery you imposed on them, it will never end. for each palestinian you murder two others will rise and continue the struggle.

and saying this doesnt mean i condone the CIA drone murders. the immense majority of the thousands of "suspects" that the CIA coldly executes around the globe turned out to be innocents. it's blind and random slaughter, and all it does is reinforce the extremists. what do you think a father does when a CIA drone blows his children to bits? if he wasn't al qaeda before then he surely becomes it.
al qaeda was nothing in yemen when the drone killings started, but year after year it keeps growing thanks to the CIA.

of course I questioned the barrel bombings anonyme, only i dont accept the accusations made by terrorists at face value like you do. and again, these situations are not comparable.
the CIA is killing people from far away, not caring about the people they kill because in the end they hate all arabs and all muslims, and this is visible in every bit of their culture, from their movies where all arabs are depicted as violent animals, to their presidential candidates' speeches where the one who makes the most hateful xenophobic statements gets the most media exposure and highest poll results.

to the CIA whether or not they are killing guilty people doesnt really matter, unproven "suspicions" on one person is enough for them to bomb an entire building or a wedding party and operators as well as officers and decision makers never have to answer to it.

if you really think the syrian army is blindly killing and their objective is to kill their own civilians, how come after nearly 5 years of bitter war, there is less than half as many dead in syria (from both the pro and anti regime sides do not forget that) then there was in the invasion of iraq, which lasted a few weeks and made half a million dead (from one side only, the iraqi one)

in comparison, the syrian army is fighting for their people, for the survival of their country, for their freedom, they're not sitting in offices thousands of kilometers away coldly executing random people. the people dying are their families, friends, and countrymen, the struggle to rid syria of the foreign agents and mercenaries that are bleeding it is an existential one for them. they cannot let the terrorists take and hold syrian cities, they have no choice but to go after them and clear them. yes certainly the price is high and there are undoubtedly innocents being killed in the process, but the cost of letting terrorists take over would be even higher.

First, I'm not Israeli. Nevertheless, you take a one-sided view -- and ignore the goal of most Pals to destroy Israel rather than make piece with it and trying to accomplish that goal by firing rockets at its civilians. Israel has offered to settle the conflict twice on terms very similar to what Abbas says he is seeking.

In any event, there is no justification for random stabbings and car rammings -- that's terrorism in my book.

of course you are israeli, who else would come running here on an unrelated topic to bring up israeli crimes and make their apology?