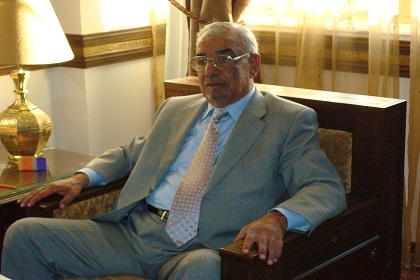 Later in the day, NNA said Eid's coffin arrived at his house in the Akkar town of Hikr al-Daheri on Syria's border after being transferred from the Bassel Assad Hospital in Tartus where the ex-MP had been receiving treatment.

The casket was received in Hikr al-Daheri by “senior officials of the Arab Democratic Party, municipal chiefs, mayors and a number of dignitaries from the towns of villages of Akkar's plain, in addition to members of the Eid family.”

Supporters fired heavily in the air and launched fireworks upon the coffin's arrival, the agency added.

Eid's funeral will be held at noon Saturday at the Sheikh Abdullah al-Daheri Shrine "on the Syrian bank of the Grand River in the Hikr al-Daheri region," NNA said.

The ex-MP was wanted in Lebanon in connection with the 2013 twin bombings that targeted Tripoli's al-Salam and al-Taqwa mosques and left 45 people dead and over 500 wounded.

Eid and his son Rifaat, also wanted in Lebanon, were spotted in early March on the Syrian side of the border town of Hikr al-Daheri on Lebanon's frontier.

They were participating in the funeral of Bader Eid -- a brother of the ex-MP -- who was shot dead in the Akkar town of al-Kuweikhat.

A 2014 indictment had demanded the death penalty for Rifaat Eid and three senior Jabal Mohsen fighters.

The two fugitives, Ali and Rifaat Eid, had managed to flee to Syria as an unprecedented security plan got underway in Tripoli in April 2014.

Eid's pro-Damascus Arab Democratic Party, the main faction in Jabal Mohsen, participated in more than 20 rounds of deadly sectarian fighting with gunmen from the neighboring Bab al-Tabbaneh district between 2008 and 2014.

Thats half the garbage of the streets of Lebanon. Merry Xmas everyone

Merry Xmas, he is surely in the depth of hell burning! Great news!

Interesting how many thugs are ex-mps.