Geagea, Berri in War of Words over Aoun's Candidacy 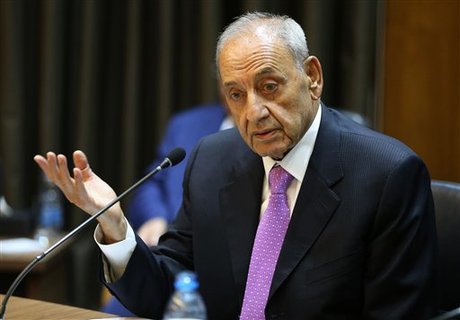 Berri was asked by his visitors about a recent comment made by Geagea that the ball is now in the court of Hizbullah, which should force its allies to vote for Aoun as president if it were true in its intentions to support him.

“What should Hizbullah do?” the speaker wondered. “Do they want it to put a gun, a rifle or a rocket in the head of Saad Hariri, Walid Jumblat, Suleiman Franjieh and Nabih Berri to elect a certain candidate?”

“Things are not done that way,” Berri said.

But Geagea responded via twitter, asking "on what grounds Michel Aoun is the candidate of the March 8” alliance.

The LF chief's tweet promoted a response from Berri, who said: “On the same grounds of your nomination by the March 14” alliance.

The war of words came as Berri told his visitors in remarks published in newspapers on Monday that the February 8 session set for the election of a president will most likely be adjourned for lack of quorum.

He ruled out the election of a new president in the upcoming session after Geagea's endorsement of Aoun's candidacy last week.

Asked whether Hizbullah was capable of pressuring the Marada chief, who is also a lawmaker, into withdrawing from the presidential race, the speaker asked: “Why would Franjieh accept to pull out” of the race as long as he has the strongest backing?

Berri had reiterated on several occasions that he would call for a parliamentary session to elect a president as soon as the Christians agree on a candidate.

Last week, Geagea withdrew from the presidential race and backed his long-time rival Aoun in an attempt to end the 20-month deadlock that left Baabda Palace vacant following the end of President Michel Suleiman's six-year term in May 2014.

The LF chief's support for Aoun came more than a month after Hariri struck a deal with Franjieh to back him for the presidency in return for the Mustaqbal leader to be chosen as a prime minister.

The move angered both Aoun and Geagea, who announced their rapprochement last Monday. But the two officials failed to strike a deal with Marada and the Kataeb Party, the two other influential Christian parties in the country.

“The Aoun-Geagea agreement is not enough,” Berri said. “How about the two other parties?” he asked.

The seat of the Maronite church has stressed that “there are four powerful Christian parties and that there should be consensus among them on the next president,” Berri told his visitors.

He said that he has advised two FPM officials, Foreign Minister Jebran Bassil and Education Minister Elias Abou Saab, to visit Franjieh and strike a deal with him.

Berri reiterated that the LF-FPM rapprochement is a great leap forward in inter-Christian ties but does not resolve the presidential crisis.

and the wheel churnes round again

Speaker Nabih Berri has confirmed that the next parliamentary session set for the election of a new president will meet the fate of its predecessors.....

There are 2 March 8 candidates and they are now the only two viable candidates yet the Hezbollah dominated M8 ( thank you Syria ) alliance will not elect any of those two. But, it is KSA that is obstructing the elections.

Hezballah and Mr Berri are correct in doing everything in their power to stop the election of the Maronite president. It's there right and prerogative to stall until the regional climate is right to throw Taef accord, and all the unfair privileges it allows to the 24% Christian minority especially the Maronite sect, into the dustbin of history and elect a president who represents the Shiaa majority. The new day is dawning my fellow Lebanese a day of true fairness and reprentave government ruled by the dispossessed overwhelming majority Shiaas!

And whose culture is back aged and whose level of intellect is below zero.

I agree. I do not want to live with people whose heart is filled with hatred.

And where did your sub intellectual brain come out with your arbitrary number of 24% You must have gone and counted them yourself. No point arguing with a moron like you.

@lebjack
do you also think that i post under 100 different screen names?

hmm, does this apply to Alawites too? lol ;-)

Ebola supporters are finally revealing their true identity and objectives.

Also They never understood - because of their hatred - how the idea of "Living Together" can lead to a beautiful country...

You need another 1000 years to learn about democracy...

druze founded lebanon since fakhreddine,and outside is not inside....

Who the heck said anything about gunpoint, a little nudge, push, coax and a couple of black shirts where needed would suffice nothing more than the usual fair the hezb has been regaling us with for the past decade and POUF, quorum complete and a new president is born.. Unless The herb is obstructing the election of a president for a completely different reason, waiting on the secret word from Iran perhaps?

PS: Btw ya 7adrat al asteez Nabih, the constitution does not mention a quorum past the first ballot, only a vote of half plus one the two third quorum is of your own invention shame of the MPs M14 & M8 for accepting it.. just saying?

So, what Berii is saying is that until ALL christians agree on the same candidate, there will be no president. How is that for democracy? It works in shiah street perhaps, but not with the christians. He even has the nerve to speak on behalt of the maronite church claiming four voices that have to sing the same tune. Thats not what I heard from several maronite church officials after the Maraab-agreement. They now look forward to Berri and others to respect their words. By continue to obstruct the christians having their candidate of choise, they are buiding up pressure like a steam boiler. Sooner or later the people will hit the streets.

The usual suspects are scrambling... Berri, Jumblatt, Harri etc. What to do with the unexpected maronite alliance? The same group who have divied up Lebanon to the foreign occupiers are now confused to which Presidential candidate is acceptable to their foreign lords! Aoun or Frangieh? It shouldn't be that hard! Geagea has really shocked them all! I fear for Geagea's life now. Be careful ya Hakim. Any previous Lebanese Politician that has been that bold and nationalist has been assassinated !

Lebanese must stay sectarian and divided!!

there is no room or acceptance for a strong Republic of Lebanon!

The statements from Berri and Nasrallah that they support Aoun as their candidate for the Presidency was not genuine. Berri's support of Frangieh is not genuine. What they want is to break down Taif, end the current order of 50-50 split with the Christians and a Christian Presidency and to do this by boycotting the legitimacy of the current state institutions. Aoun has been complicit in the effort with his hardheaded demand to be the consensus president. Berri and Nasrallah have hid their true agenda behind this impossible demand so as to deflect criticism.
Geagea by endorsing Aoun and withdrawing his candidacy has shown the bright light on Berri and Narallah who are hiding behind Aoun.

It is time to break the country into pieces... The big plan is happening.

They dont need to be so brutal as to kill Aoun, they just have to let time take its course playing the waiting game and Aouns age will catch up with him. I do hope that they dont succeed with these tactics, but its gonna take strong words from key opinion leaders as well as people in the streets.

Christians uniting is the only way to save lebanon from the radical muslim agenda... Whether it be shia or sunni, they are lead by Ksa and Iran, which is not Lebanese. So good on Geagea and Aoun for realizing this. Christianity is the only thing keeping Lebanon a place of tourism and hope for Lebanese world wide. Because as long as the president is Chrisitian radical Isalm will not prevail. It will also keep muslims who respect Islam and its true meaning safe from those who have misinterpreted what prohet Mohamed preached. Its sad to say a religion so peaceful has been demolished by the likes of the radical kufar