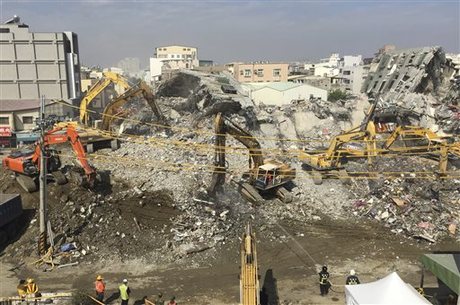 Rescuers have found the bodies of more than 100 people killed after an apartment block in Taiwan collapsed during an earthquake one week ago, emergency services said on Saturday.

Only three residents of the Wei-kuan complex in the southern city of Tainan remained unaccounted for as emergency services drew close to completing their search, after rescuing hundreds of people from the ruins.

The death toll now stands at 114 with 550 injured, according to the latest count from the National Fire Agency.

More than 280 people have been pulled from of the rubble of the 16-storey building since the 6.4-magnitude quake struck one week ago.

Wei-kuan was the only high-rise in Tainan to crumble completely, prompting questions about the construction of the building, which was completed in 1994.

Prosecutors have taken the developer, Lin Ming-hui, and two of his associates into custody on charges of professional negligence resulting in death over the disaster.

Investigators found flaws in the construction, including a lack of steel reinforcement girders, according to a statement released by the court.

Pictures of the ruins showed tin cans and foam were used as fillers in the concrete and evidence has emerged that walls may have been knocked down that affected the structure of the building.

The Tainan city government won a court ruling Friday to freeze almost a million dollars in assets belonging to Lin and three associates, to prevent anything being disposed of before claims can be made by the victims.