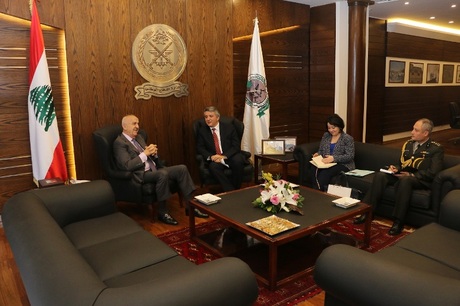 Following the halt of a Saudi program to fund aid to the Lebanese army, Turkey expressed willingness to provide Lebanon with military aid worth $1.1 million, the National News Agency said.

Turkish ambassador to Lebanon Cagatay Erciyes told Defense Minister Samir Moqbel that his country is ready to “continue to support Lebanon and its army,” NNA said.

On Friday, Saudi Arabia halted a $3 billion program for military supplies to Lebanon in protest against Hizbullah's policies and recent diplomatic stances by the Lebanese foreign ministry.

In light of positions taken by Hizbullah the kingdom proceeded to "a total evaluation of its relations with the Lebanese republic," a Saudi official statement said.

It added that the remainder of a $1 billion financing package for Lebanese security forces had been suspended, in a separate decision.

KSA withdraws $4 billion but Turkey steps in with $1.1 million. Hallelujah we are saved!!!

This is a statistically insignificant number in comparison with what we could have had. In short, we lost the chance to have a proper army and worse, we are now at a real fundamental existential threat because of that. And its not just about defence, the Saudi bank that withdrew from Beirut earlier this week meant that Saudi investors no longer trust Lebanon. We are heading towards a catastrophe that would make Greece look like a bad hair day. Our problems are now compounded with 2 million outsiders leeching our economy (the rich ones of them already left thanks to his majesty Nasrallah). And to top it all out we have world war 3 on our borders. Welcome to Lebanon 2016, the failed state. We let this happen because we were never strong enough to tell the man in the black turban that we dont fear death.

I dont disagree, there are lots of middle men who were dying to get in on the act. Just like the garbage crisis or the supposed oil fields. On the strategic level though this doesn't make that much of a difference and certainly isn't a factor big governments take into consideration when cancelling these deals.

We shouldn't forget this hurts Saudi too to a certain extent. Their relationship with the French is at stake and so is their wider strategic interests of keeping Lebanon a country of institutions. We all knew King Salman did things differently, and we all feared that his more 'strike it while its hot' approach might hurt us, but we couldnt possibly think they would do this. It means they have properly given up on us. Without Saudi support we are at a real risk of losing the last remaining economic pillars.

I don't personally believe it is this bad. I think the oil crash is certainly pressuring Saudi. They also cancelled their $6 billion education aid program to their own citizens. But, it is an ominous sign of things to come.

From Bedouin arab lies to turkish ottoman lies! Lebanon will receive nothing in full from either side! Only Lebanese can and will provide for ourselves! Does anyone know that Lebanon had their own Missile/Rocket programs called "The Cedar 1", "Cedar 2" and Cedar 3 that launched with a distance of over 140km in 1960! Israeli protests caused the program to be shut down after american pressure... We have the brains and ability and don't need to be the pawns and slaves of anyone if we are united! Unfortunately we are now sectarian beggars... Lebanon was once a king now we are slaves!

And idiots here still speak of how christians are over represented in government!

As the as the Resistance is 100% Sectarian, it can never be in line with the army. As long as the RESISTANCE defies the State and controls part of the State it can never be a national focal point.
You want true resistance, then subject it to Lebanese rules and LAF command. True resistance will encompass all sects and not be limites to Shi3a financed by a Shi3a country to promote Iran's goals.

True but we cant ask the resistance to submit to clearly sectarian corrupt politicians! Unfortunately the Lebanese are too easily corrupted by sectarian and financial pressures! Its understandable that the resistance is afraid of this corruption. However, what is clear is the LAF is pure in their defence of the Lebanon! The LAF is the Watan that defends our nation and is the only Lebanese institution that is non sectarian! That being said, the unity of the LAF and resistance must occur sooner then later!

That's why I support a military coup! A coup in the same sense as Foude Chehab... For lebanon and cleanses us of these corrupt leaches!

you mean like your freedom of speech burning TV stations and blowing up journalists?

Yes, "Foude" was a nice person.

What a stupid number! That would buy nothing for the army. It's like a $20 gift certificate from Hugo Boss. 'It's a gift, but it will buy you nothing, happy birthday"!