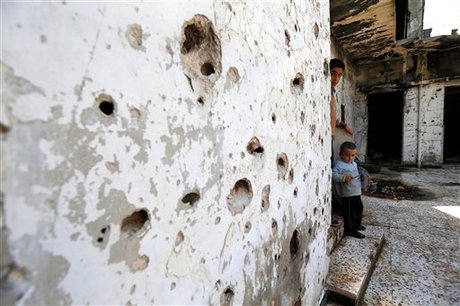 Aid workers on Monday made the first delivery of desperately needed assistance since the start of Syria's fragile ceasefire, as an international task force met to try to bolster the truce.

The task force co-chaired by Moscow and Washington held talks in Geneva to evaluate allegations of a range of breaches, said the United Nations which has mediated the three-day-old ceasefire.

On Monday, Russia said seven violations were recorded in the past 24 hours.

However, "the ceasefire between government troops and opposition forces is on the whole being observed," said General Sergei Kuralenko, tasked with monitoring the truce for Moscow, quoted in a defense ministry statement.

The White House said it was not surprised by reports the ceasefire had been breached, but indicated it was too early to call it a failure.

"We are aware that there have been some reports of violations," White House press secretary Josh Earnest said.

"We did anticipate that there would be reports of violations and that we would encounter some potholes on the road to implementing this successfully."

Saying the international contact group would seek to verify dozens of reported breeches, the White House said: "We remain committed to this process."

U.N. chief Ban Ki-moon said there have been some incidents but the ceasefire was generally holding.

"As of now I can tell you that by and large the cessation of hostilities is holding even though we have experienced some incidents," he said.

And in an encouraging sign, aid workers began the first aid delivery since the deal came into effect, the Syrian Arab Red Crescent said.

- Thousands could die of starvation -

U.N. humanitarian coordinator Yacoub El Hillo said he hoped the relative calm would allow aid to be distributed to 154,000 besieged people over the next five days.

And the U.N.'s food agency said "unprecedented" pledges meant it could fully fund food aid to Syrian refugees in Jordan, Lebanon, Iraq, and Egypt throughout the year.

Pressure was building to relieve civilians under siege after the U.N.'s human rights chief said thousands could die of hunger.

"The deliberate starvation of people is unequivocally forbidden as a weapon of warfare. By extension, so are sieges," Zeid Ra'ad Al Hussein said, warning that "thousands of people risk starving to death."

The flow of much-needed assistance could also create a more favorable backdrop for peace talks that collapsed in acrimony in early February.

U.N. envoy Steffan de Mistura aims to relaunch negotiations on March 7 if the ceasefire lasts and more aid is delivered.

The opposition's HNC on Sunday described the ceasefire as "positive" but lodged a formal complaint with the United Nations and foreign governments about breaches.

"We have violations here and there, but in general it is a lot better than before and people are comfortable," said spokesman Salem al-Meslet.

An HNC letter to Ban accused the Syrian regime and its allies of committing two dozen truce violations that had killed 29 people.

The ceasefire does not apply to territory held by the Islamic State group and al-Qaida affiliate al-Nusra Front.

Turkey's President Recep Tayyip Erdogan said the truce is "in place in one third of Syria, not all over."

"Now there's no ceasefire all over Syria. Attacks are unfortunately continuing here and there."

In Aleppo, the Syrian Observatory for Human Rights reported some rebel rocket fire on government-held neighborhoods but no casualties.

"Our teachers used to forbid us from going out to the school yard because of the air strikes but today we went out and played," said Ranim, a 10-year-old pupil in the school of the rebel-held neighborhood of Bustan al-Qasr.

The Observatory reported nine Russian air strikes on a town in the central province of Hama but had no immediate word on casualties.

It said seven civilians were killed in Russian strikes Sunday on a town in Aleppo province where al-Nusra has a presence.

There has also been no let-up in the U.S.-led air campaign targeting IS since the truce took effect.

The coalition said on Sunday it carried out 12 strikes against the jihadists in Syria, four of them around the town of Tal Abyad on the Turkish border where IS has been trying to regain territory from U.S.-backed Kurdish forces.