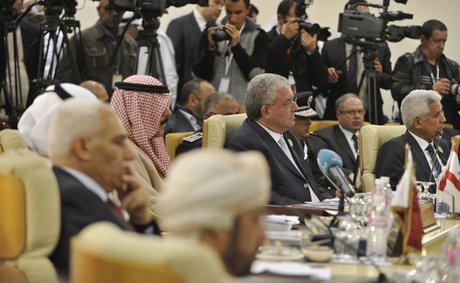 The minister made his objection against the closing statement of the 33rd Arab Interior Ministers Conference held in Tunisia.

The gatherers at the conference had condemned the practices of Iran and Hizbullah, describing the Lebanese party as terrorist, said al-Jazeera television.

Mashnouq had stated ahead of the conference that he will defend “all the Lebanese people.”

“Outside Lebanon, I cannot but defend all the Lebanese,” he declared.

During the conference, he told the gatherers that no one can change the identity of the Arab people, adding: “We refuse to allow Lebanon to become a thorn in the Arab world's side.”

Earlier on Wednesday, the GCC labeled Hizbullah a “terrorist organization,” a day after Sayyed Hassan Nasrallah accused Saudi Arabia of pressuring Lebanon to silence his party.

The GCC cited the party's "terrorist acts and incitement in Syria, Yemen and in Iraq," which were threatening Arab security.

Tensions rose in Lebanon last week when Saudi Arabia announced that it was halting $4 billion in aid to the Lebanese army and security forces.

Its decision was followed by a travel warning and a decision to blacklist several individuals and firms over their alleged ties with Hizbullah.

Saudi Arabia has linked its move to Lebanon's refusal to join the Arab League and the Organization of Islamic Cooperation in condemning attacks on Saudi diplomatic missions in Iran, and alleged Hizbullah "terrorist acts against Arab and Muslim nations."

Mashnouq has just guaranteed himself the seat of the next prime minister.

I am sure his stance was coordinated with Sa3d (the coward)

So stop whining about Hezbollah when it suits you. I pray these thugs come for you one day and so they should. When Bassil does the same, the fake Moustaqbal makes a national crisis out of it. Hypocrites

southern is so popular and many many fake accounts of his vote him up.

as a fanatic, an extremist, and a radical... you zip it southy!

Lebanon and specially this failed future movement deserve everything the terrorist hezbollah throws their way.

Southern, as an Iranian you're under the same umbrella. By your own claim, you yourself are a foreigner, very hypocritical of you.

Well flamethrower, for your petty information I wasn't talking about Machnouk, your friend Southern dismissed liberty's assessment, since in his brain defined liberty as foreign. As usual your Iranian tactics of manipulating are entertaining as always, cheers.

as an idiot, neither is yours.

According to the idiot, we all are zionists,...so let the idiot remain idiot....

Go to bed flamethrower, you're embarrassing. Humble is absolutely correct, and that saddest part is you can't break passed your programming. It's all black and white for you, which is entertaining, yet sad at the same time.

Humble it's sad how they think, but sometimes you just can't fix someone who refuses to think freely.

That includes you flamethrower :) and your 100 fake accounts.