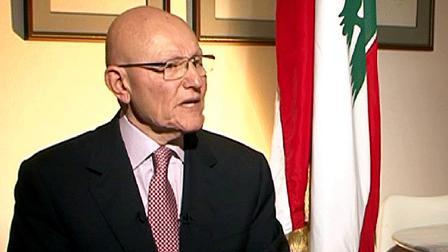 Prime Minister Tammam Salam on Monday urged Hizbullah chief Sayyed Hassan Nasrallah to stop his verbal attacks against Saudi Arabia, as he stressed that he will not allow the country to “collapse.”

“Hizbullah played a role in resisting Israel before going abroad and interfering in the affairs of other countries,” Salam lamented in an interview with Al-Arabiya television.

“I call on Sayyed Nasrallah to stop attacking the Kingdom of Saudi Arabia,” he added.

Salam's appeal comes amid an unprecedented deterioration in the ties between Saudi Arabia and Lebanon against a backdrop of a Saudi-Iranian flareup in the region.

Riyadh launched a series of measures against Lebanon and Hizbullah on February 19 when it announced that it was halting around $4 billion in military aid to the Lebanese army and security forces. It has also pushed the Gulf Cooperation Council to label Hizbullah as a “terrorist” organization and accuse it of "terrorist acts and incitement in Syria, Yemen and in Iraq."

Saudi Arabia has linked its measures to Lebanon's refusal to join the Arab League and the Organization of Islamic Cooperation in condemning attacks on Saudi diplomatic missions in Iran last month, and alleged Hizbullah "terrorist acts against Arab and Muslim nations."

“I tell the Gulf countries, especially Saudi Arabia, that the historic ties between us and them will continue and will remain strong and we are exerting efforts to consolidate them,” said Salam on Monday.

“We admit that a mistake has happened and has strained the relation between us and Saudi Arabia and the Gulf countries,” he added.

“We have not been successful in implementing the dissociation policy in a proper manner,” Salam admitted.

Noting that his government is “walking in a minefield,” the PM stressed that “the Gulf countries and Saudi Arabia have a special place in the hearts of the Lebanese.”

“The current government cannot compel any group to do anything and consensus must govern all issues,” he told Al-Arabiya.

Pledging that Lebanon will not “abandon Arabs” or “its Arab identity,” Salam called on all Lebanese parties not to subject the country to “what it cannot withstand.”

“We will not allow Lebanon's collapse and I don't think that the GCC states do not want the presence of a government in Lebanon although they have the right to address remarks to us,” he added.

“We cannot unravel the relation we have now in the cabinet because that would subject Lebanon to collapse,” he said about Hizbullah's presence in the cabinet.

As for the statement that the cabinet issued in the wake of Riyadh's measures, Salam added: “We preferred to express our stance in a cabinet statement, which prevented the government's collapse although it did not satisfy everyone.”

“We won't be outside Arab consensus but Hizbullah is a main component of Lebanon,” he went on to say.

Besides the corrupt politics, the general population in Lebanon is too blind to the reality of suffering that surrounds them. At this point I think it's too late to come back from it, they're all bought by foreign powers and refuse to even think for themselves. But that's ok! They'll just turn the other way, ride the backs of foreigners and avoid the direct problems as if life's peachy, then the cancer and cholera besides religious nonsense will take over. Nice work guys, top score.

Mr Prime Minister Salam is a good man, but also a weak person.....

"my grace is sufficient for you
for my power is made perfect in weakness." 2 Cor 12:9

Salam have to stay calm. Lebanon will do just fine without Saudi Arabia and the GCC.

Stop panicking and make due without the Saudis.

The others are bought by your people, the country is screwed. Thank you for contributing with your ideology and immense carelessness.

sure miss tic coz i guess iran will help Lebanon with grants and projects to back the economy and invest, mooo hek?

you "urge" someone who has morals and dignity. You urge someone who cares about his country and its future. You don't urge a traitor and a sell out.

i guess iran will help Lebanon with grants and projects to back the economy and invest, mooo hek?