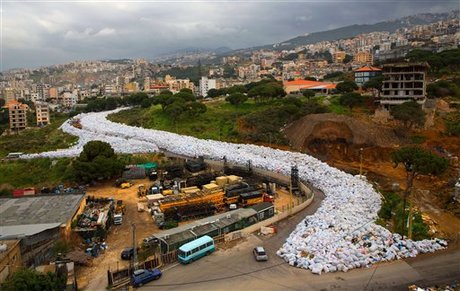 Protesters from the “You Stink” movement sought on Monday to block several major roads that lead to Beirut, saying their move is aimed at rejecting the landfills that will be established by the state.

Police pushed dozens of protesters to the side of the highway in Dora and in another area in Hazmieh to stop them from blocking the roads during the early morning rush hour.

Security forces arrested a woman in Dora after she sat on the asphalt in the middle of the road despite the heavy rain.

In another area, demonstrators partly blocked the Khaldeh highway but it was reopened by police.

"Today we are sending a message to the government, these were symbolic actions," said activist Assad Thebian.

"We are in discussion with unions and organizations to step up our action for next time."

Another activist described the government of Prime Minister Tammam Salam as the cabinet of “rubbish,” saying it has tasked Sukleen with collecting the waste at a time when the company faces charges of squandering of funds.

The man warned the Lebanese that their children will die of cancer as a result of the landfills.

The trash crisis began in July, when the country's main landfill in the town of Naameh just south of Beirut, was closed.

The government announced on Saturday a temporary solution for the country's eight-month trash crisis by opening three landfills.

The Naameh landfill will be reopened for two months to take in tens of thousands of tons of trash that have piled around the country while two other landfills and treatment plants will be opened in Bourj Hammoud north of Beirut and Nahr al-Ghadir area (Costa Brava) that lies south of the capital.

But the activists are demanding a more long-term waste-disposal plan.

Earlier this month, "You Stink" posted on its Facebook page a jarring video of mountains of trash festering across Lebanon.

In one of the shots filmed by a drone, plastic bags containing rubbish can be seen stretching for miles like a flowing river.

The footage, which was widely shared ahead of the demonstration, mocked the tourism ministry over a video it had commissioned to highlight Lebanon's natural beauty.

Those "You Stink" guys are right in the principle but are total failures on action.
They do not communicate properly.
They are not convincing.
They make beginner's mistakes (start a rally from Sassine square.
They are not well organized (their road block failed miserably)... too bad...

I was reading last week on Social Networks that was the final warning to the Government, today they are saying that they're sending a message to the government! I am kind of lost here..... The only revolution you can have is at the ballot boxes come election day - PERIOD