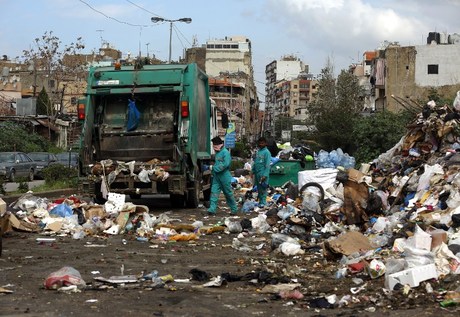 A waste management plan that was approved last week was put into implementation on Saturday with the first garbage dump trucks entering the Naameh landfill that has been closed for over eight months.

Seven dump trucks entered Naameh that will receive only the trash that has accumulated on the streets of Beirut and Mount Lebanon, according to the cabinet's plan.

Last week, the cabinet decided to establish two landfills in Costa Brava and Bourj Hammoud and to reactivate the Naameh landfill for two months as part of a four-year plan to resolve the country’s waste problem despite the rejection of many residents and civil society activists.

Preparation works kicked off Friday at the Costa Brava seaside site in Khalde where the government has decided to set up a garbage landfill as part of a plan to resolve the country's long-running waste management crisis.

Lebanon's unprecedented trash management crisis erupted in July 2015 after the closure of the Naameh which was receiving the waste of Beirut and Mount Lebanon.

The crisis, which sparked unprecedented protests against the entire political class, has seen streets, forests and riverbanks overflowing with waste and the air filled with the smell of rotting and burning garbage.

A landfill’s location in the Shouf and Aley areas will be determined later following consultations with the local municipalities, the cabinet said.