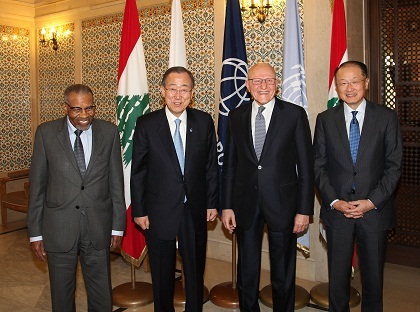 He said after meeting with Prime Minister Tammam Salam at the Grand Serail: “We are worried about the political situation in Lebanon that does not serve stability.”

“Lebanon is a symbol of diversity in the region and the presidential vacuum should be resolved as soon as possible,” he added on the first day of his two-day trip to Lebanon.

Commenting on the refugee crisis in Lebanon, the U.N. chief said: “The international community is ready and committed to help Lebanon.”

“Few countries have shown such generosity towards Syrian refugees,” he noted.

Ban also expressed his “deepest condolences” to Lebanon over the death of a soldier in a roadside bomb in the northeastern border area of Arsal earlier on Thursday.

For his part, Salam said: “We call on Lebanon's friends to continue on supporting its army against terrorist threats.”

The premier also highlighted the burden of Syrian refugees on Lebanon, saying that the country is no longer able to support further burdens.

Head of the World Bank urged during a joint press conference with Salam, Ban, and Madani Lebanese officials to reactivate the political institutions, most notably parliament, in order for Lebanon to benefit from financial grants pledged to the country.

He revealed that the World Bank had presented 100 million dollars to Lebanon's education sector in recognition of its education of refugees.

Agreements worth around 400 million dollars were also signed during Salam's meetings with the officials.

Ban arrived in Lebanon on Thursday on a two-day visit that saw him visit the headquarters of the U.N. Interim Force in Lebanon and Speaker Nabih Berri.

Media reports on Thursday, said that Salam would express during his talks with Ban his rejection of the naturalization of Syrian refugees amid reports that the U.N. chief was pressing for such an issue.

Lebanon currently hosts around 1.5 million Syrian refugees who have escaped the fighting in the neighboring country.

Around 4.6 million Syrians have fled to nearby states -- Jordan, Lebanon, Turkey, Iraq and Egypt -- while hundreds of thousands have gone to Europe.

In February, world leaders pledged a total of $10 billion to help millions of victims of Syria’s civil war and the countries hosting them.