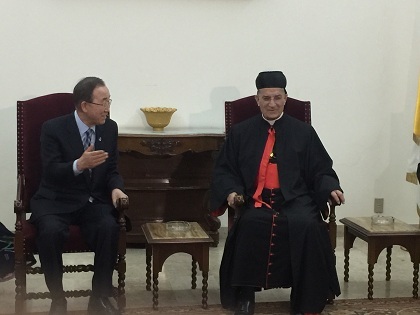 The memo includes a demand that the international community assume its responsibilities towards Lebanon regarding the presidential deadlock.

It said that the elections “are no longer an internal affair, but they have taken on Arab and regional aspects, which requires the U.N. and Security Council to intervene.”

Bishop Boulos Sayyah told al-Joumhouria newspaper that Ban was the first to bring up the issue of the presidential impasse during his meeting with al-Rahi.

He told the patriarch that the Lebanese people must elect a head of state because the vacuum is leading to instability and the paralysis of state institutions, to which al-Rahi replied that the polls have become linked to external affairs.

“Al-Rahi did not receive a vow from Ban that he will seek to end the deadlock because the U.N. chief insists that this is a Lebanese matter,” Sayyah revealed.

Those who obey to outside orders are in the darkness and are doing evil destructions for the rest of the people. They will end up in the eternal fires of Hell.
God is pure Love and does not need an army to defend Him nor weapons to fight for Him.

Does God believe that Muslims and Christians in Lebanon should have equal voting power?