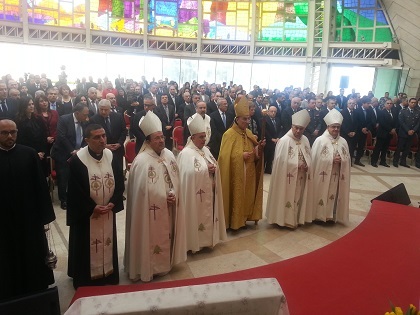 Maronite Patriarch Beshara al-Rahi stressed on Sunday that the failure to elect a president destroys Lebanon's unity and makes it an open ground for the naturalization of refugees.

“Refraining from electing a president for over two years now is gradually destroying our internal unity and Lebanon's position at the international level. It makes our country a free ground for the naturalization of refugees,” al-Rahi stated during the Easter mass held in Bkirki.

“Lebanon's officials and people refuse that the return of Syrian refugees is voluntary matter, similar to what happened with the Palestinian refugees,”he added.

“We asked the international bodies that the Syrian and Palestinian refugees return (to their land). That is exactly what we told (U.N. Secretary General) Ban Ki-moon,” he stated.

On Friday, the Patriarch handed the United Nations Secretary General, who was on an official visit to Lebanon, a memo on the ongoing presidential vacuum during talks they held at Bkirki.

The memo included a demand that the international community assume its responsibilities towards Lebanon regarding the presidential deadlock.

Lebanon has been living a state of presidential vacuum since the term of President Michel Suleiman ended in May 2014.

Conflicts between the March 8 and March 14 camps have thwarted all attempts aiming at electing a successor.

Syria's five-year conflict has killed more than 270,000 people and forced millions to flee their homes, with neighboring countries bearing the brunt of the refugee crisis.

Lebanon is home to the highest percentage of refugees per capita in the world.

Nearly 1.2 million Syrians are now living in Lebanon, while more than 450,000 Palestinian refugees are also registered with the UN, though experts believe the number of Palestinians in the tiny country is actually lower.

Ebola and their lackey the caporal have destroyed Lebanon for many years ahead.

Thank you Norma. May God always bless you.

so whatever the Patriarch says is Bible?

the night security guard is still roaring and mutating.