IS Tightens Noose on Regime Enclave in Eastern Syria 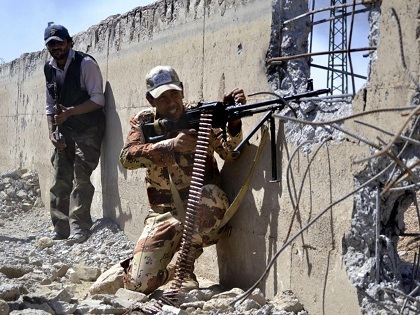 The Islamic State group has tightened the noose on a regime-held enclave in eastern Syria, overrunning part of the city of Deir Ezzor and advancing on its vital airbase, a monitor said Wednesday.

"IS seized the Al-Sinaa neighborhood of Deir Ezzor on Tuesday evening and fighting is continuing on the edge of the airport," the Syrian Observatory for Human Rights said.

An estimated 200,000 civilians are believed to remain in government-held districts of Deir Ezzor, where they have been living under siege by IS since March 2014.

The jihadists, who also control nearly all the surrounding province, have made repeated attacks on the government enclave and in January seized the suburb of Al-Bgheliyeh.

But their efforts to capture the city's airbase have so far been repulsed by elite regime troops.

There has been growing concern for the besieged civilian population and, in January, Russia announced that it had equipped Syrian military transport aircraft to carry out aid drops to the city.

On April 10, the World Food Program said it had carried out its first ever successful high-altitude airdrop, to deliver 20 tonnes of food aid to government-held neighborhoods.

A previous attempt by the U.N. agency to drop aid to Deir Ezzor failed in February, when some of the pallets missed the drop zone and others were damaged due to their parachutes failing to function properly.

The U.N. has carried out three successful air drops so far but has only reached a small fraction of the population.

Elsewhere in Syria, government air raids on a rebel-held district of the battleground northern city of Aleppo killed seven people, the Observatory said.

The strikes on the eastern neighborhood of Salaheddin were the latest salvo in a flareup of violence in and around Aleppo that has tested a Russian- and U.S.-brokered ceasefire that went into force in late February.

Opposition delegates walked out of peace talks in Geneva on Tuesday in protest at what they said was an escalation of violence by the regime.

Al-Qaida, like IS, is not party to the February ceasefire.