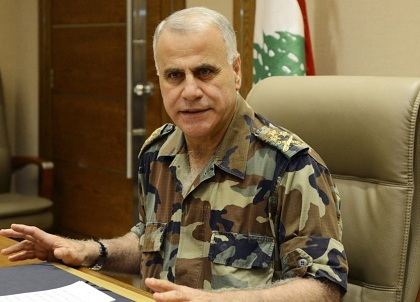 Qahwaji's visit would come as Russia hosts a conference on international security on April 27-28.

The conference's main topic of discussion is fighting terrorism, the situation in the Middle East, the traditional and new challenges and threats to the international security.

Al-Joumhouria quoted a high-ranking Russian military source as saying that “the Lebanese army and Qahwaji are true partners in combating terrorism worldwide.”

The source praised their role in stopping the Islamic State extremist group from expanding to the Mediterranean shores.

“Such a role would be marked in history,” he said.

Qahwaji has warned that the IS wanted to ignite civil war in Lebanon and create a passage to the coastline in the North.

The IS threat first came to Lebanon in August 2014, two months after the group's summer blitz in which it seized large swaths of territory in Iraq and Syria. In a surprise attack, the IS and al-Nusra Front militants crossed over from Syria and overran the northeastern border town of Arsal, hitting Lebanese army positions and killing nearly 20 soldiers.