U.S. Says Coalition Jets Did Not Overfly Area where Badreddine was Killed 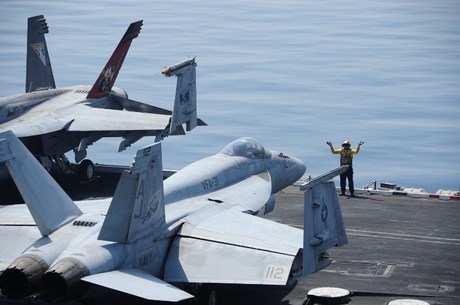 The United States announced Friday that U.S.-led aircraft did not overly the Syrian area where Hizbullah's top military commander Mustafa Badreddine was killed in a mysterious blast.

"There were no U.S. or coalition aircraft in the area where he was reported to be killed," White House spokesman Josh Earnest said at a press conference, noting that Washington could not confirm Badreddine's reported death.

Baghdad-based U.S. military spokesman Colonel Steve Warren meanwhile said it was unclear who carried out the strike, but the United States was not involved.

He also said "it's simply too soon to tell" who was behind the attack and what its effect would be.

Badreddine was in a warehouse near Damascus airport when it was rocked by a blast on Thursday night, Agence France-Presse quoted a Syrian security source as saying. No aircraft was heard before the explosion and no one knew he was there, the source said.

The airport and its surroundings adjoin an area of fighting around the Sayyeda Zeinab shrine, which is revered by Shiites around the world. The Syrian army controls the area, and Iranian and Hizbullah fighters are also present in force.

Badreddine, in his mid-50s, was a key player in Hizbullah's military wing.

He was on a U.S. terror sanctions blacklist, was a key suspect in the 2005 assassination in Beirut of ex-PM Rafik Hariri and was one of the "most wanted" by Israel.

The Iran-backed Hizbullah did not say which of Badreddine's many enemies it held responsible for his death.

But the group's deputy leader Sheikh Naim Qassem told mourners at the funeral he was killed in a "huge blast" at a Hizbullah position near Damascus airport.

He said a probe was underway, but "because there are many possibilities, we don't want to anticipate the investigation."

"I assure you however that within hours, no later than Saturday morning, we will give a detailed account about what caused the blast and who was behind it," Qassem said.

Hizbullah has "clear indication" on who was responsible and how it happened, "but we need some more time to be one hundred percent sure," he added.

"According to preliminary reports, a large explosion targeted one of our positions near Damascus international airport killing brother commander Mustafa Badreddine and wounding other people," Hizbullah said in a statement earlier in the day.

"We are going to pursue an inquiry to determine the nature and causes of the explosion and ascertain whether it was the result of an air strike, a missile or artillery fire," it added.

Israel made no comment, but Israeli media underlined Hizbullah's failure to apportion blame.

In its 2012 terror blacklisting of Badreddine, Washington charged that he was the key pointman for Hizbullah's operations in Syria alongside major foreign backer Iran in support of President Bashar Assad's regime.