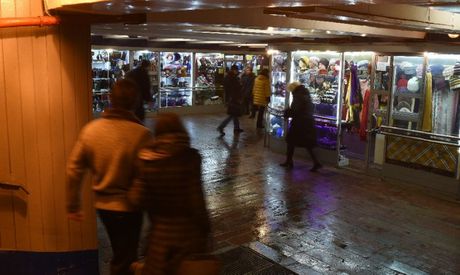 Russia's ubiquitous sheet metal sheds -- where tires are changed, furniture repaired and fish smoked -- have become bustling hubs of a shadow economy essential to the livelihoods of the country's crisis-stricken population.

Built in the 1960s and 1970s close to Soviet-era apartment blocks, the clusters of boxy garages today house much more than cars -- everything from stables and saunas to pharmacies and the odd crayfish farm.

The garage complexes are found all across the country and have taken on a new role as premises for small businesses. While this is technically illegal and they are prey to police crackdowns, they are tolerated in some areas as a source of stability and employment in a volatile times.

"We do everything we can here," said a young man unloading a truck at a sprawling Moscow complex nicknamed Shanghai with hundreds of these sheet metal or concrete blocks "shops".

Like all those working at Shanghai, he refused to give his name when speaking to AFP since he has no official papers.

In the maze of sheds, others fixed engines, changed tyres or ran a makeshift cafe selling steaming tea, chocolate bars and kebabs.

A 22-year-old Uzbek man told AFP he had been fixing cars in Moscow's garage complexes for the past six years.

His clients were "regular customers, friends," he said, adding that earnings were split between the garage owner and the workers.

Municipal authorities -- who have been driving a city-wide cleanup -- have also vowed to tear down Shanghai. The complex is located on a prime site right next to the main building of Moscow State University. Parts of Shanghai have already been reduced to rubble.

Yet in regions where living is more precarious, authorities turn a blind eye and black market garage businesses are allowed to thrive.

"People work in garages to reduce operating costs and to distance themselves from the authorities, the people with whom they want to have the least possible contact," said Sergei Seleyev of the Khamovniki Foundation for social research, which has published a report on the subject.

It found an eclectic range of businesses in garages including stables, cafes, pharmacies, stables, saunas and even a crayfish farm. In resort towns, some garages have been converted into basic accommodation for holidaymakers. Those located near cemeteries sell tombstones. Near large factories, subcontractors use them to produce spare parts.

In some Russian cities, up 15 percent of the working population make their living in this garage shadow economy, some registered as private contractors, others illegal, and many earning more than the local average wage, Seleyev said.

And boomtime or bust, their numbers vary little. They provide people with a "certain stability, regardless of changes in the economy," said Seleyev.

More Russians have slippped into poverty since Western sanctions, imposed after Moscow's intervention in Ukraine, and low oil prices battered the energy-dependent economy and significantly diminished their purchasing power.

The country's poverty rate reached a nine-year high earlier this year, state statistics showed, with 19.2 million Russians -- or 13.4 percent of the population -- living below the poverty threshold.

"This is a part of the economy that is left out of statistics," sociologist Svetlana Barsukova of Moscow's Higher School of Economics told AFP. "But it is an important part nonetheless."

The garage complexes have long played a fundamental social role in the country, according to Barsukova.

In the Soviet era, when stores were not well-stocked, their owners used them to also hold consumer goods or belongings that might come in handy later on.

Men of all social ranks gathered there to clean and work on their cars. It was one of the few places they could mix freely at a time when most social activities were overseen by authorities.

In the economic turmoil of the 1990s following the collapse of communism, many garages were turned into warehouses by Russians who rushed abroad to import coveted foreign goods for resale at home. Then they became a convenient place to open small service businesses.

Today, authorities in medium-sized cities far from Moscow -- where jobs may be rare and low-paid -- turn a blind eye, hoping that if they tolerate the black market garage trade the population will overlook the country's economic woes.

"It's a compromise between the people and the government," Barsukova said. "The people's energy is not going into political protest but into economic survival."