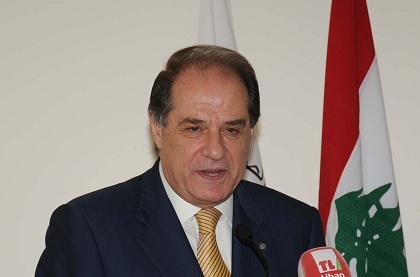 Labor Minister Sejaan Qazzi of the Kataeb Party has hinted that he will not abide by his party's decision to resign from Prime Minister Tammam Salam's government.

“I'm not an ordinary minister but one who has a long national history although some do not like to acknowledge that. I was with (slain president-elect) Bashir (Gemayel) at the age of 20 and I was a partner in decision-making, so I will not implement a decision without having a say in it at the age of 60,” Qazzi told al-Mustaqbal newspaper in remarks published Sunday.

Noting that he will not announce his final decision prior to the party's political bureau meeting on Monday, the minister pointed out that his stance stems from “national and constitutional viewpoints.”

“As for the first, now is not the right time for abandoning responsibility but rather the time for confrontation and resilience. As for my constitutional point of view, I believe that resigning from this government has no practical meaning. This is a political stance that does not prevent a minister from continuing their role and practicing their full jurisdiction, including the attendance of cabinet sessions,” Qazzi explained.

He added: “I'm not seeking a conflict with my party, in which I grew up and which had a role and an impact in my life … I hope the party will understand my decision so that I can continue this path which started more than 45 years ago.”

Asked whether rejecting the resignation will put him in a dispute with Kataeb chief MP Sami Gemayel and with the party's leadership, Qazzi said: “Up till now, there has been no noteworthy problem with the leadership, but should it happen, it will be the leadership's problem because I respect this leadership.”

Gemayel announced the resignations of Qazzi and Economy Minister Alain Hakim on Tuesday, accusing the government of failing to address the country's problems.

The decision did not involve Information Minister Ramzi Jreij, who is not a Kataeb member although he was nominated by the party.

"This government has become uncontrollable and detrimental" to the interests of the country, Gemayel said on Tuesday.

"Its existence is worse than its inexistence. Nothing justifies our participation," he told a news conference.

"The government does not care about finding a solution to the problem of Syrian refugees, nor does it care about the economic plan presented by the economy minister" or the garbage crisis, Gemayel said.