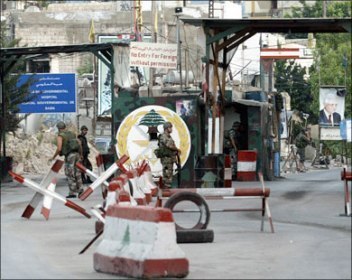 Sultan, who is stationed in Ain el-Hilweh Palestinian refugee camp, was on a visit to a relative at the Mieh Mieh camp in Sidon when an unknown assailant opened fire, wounding Sultan's brother-in-law in the hand and thigh, NNA said.

The injured man was rushed to hospital for treatment.

Al-Sultan had been injured during recent clashes in the Mieh Mieh camp.

Naharnet people, how come you cite your source when you take verbatim articles from AFP, AP, and Reuters, but when you do from the National News Agency (NNA), you do not give them credit? Plagiarism galore

Terrorist, I am surprised at your comment. You are usually one of the people whose ideas I appreciate and even enjoy reading. Are you PMSing? If so, please take it out on someone else. And when talking about someone else's "education" be careful not to stumble into your own pitfall of vulgarity. And if you have any "education" yourself, you would know that plagiarism is a crime and my question is valid. And it is a pity that Naharnet is worried about copyright issues with foreign agencies but not with the National News Agency of Lebanon, where EVERYONE gets their source for local news.

@Terrorist..."bite the hand that feeds me"? Freedom to express yourself does not entail the freedom to steal someone else's hard work or cheat that person from due credit.
I will give you examples of when Naharnet copy-pasted articles from the NNA without citing it as a source at the end as it does with foreign news agencies. I do support naharnet, but appreciating the work of your national news agency is also not to be taken lightly