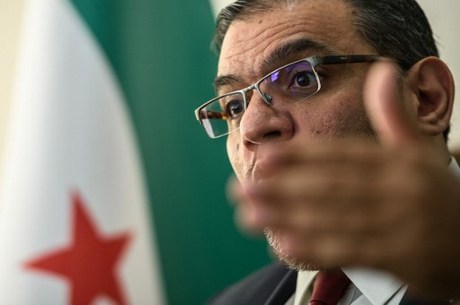 Hundreds of thousands of civilians in rebel-held areas of Aleppo risk starvation, the head of Syria's main opposition coalition said Tuesday, accusing Damascus of trying to besiege the city into submission.

Aleppo, once Syria's economic powerhouse, has been ravaged and divided in two by the conflict that began in March 2011 and has killed more than 280,000 people.

Anas al-Abdeh, head of the Istanbul-based opposition National Coalition, complained that the rebels' backers in the West were letting them down and allies of President Bashar Assad were showing greater commitment.

This lack of "political will" is endangering the shaky peace process based around stop-start talks in Geneva to create a peaceful transition after over five years of civil war, he told AFP in an interview.

Assad's regime is seeking to completely control Aleppo's Castello Road -- the rebels' last lifeline into the northern city -- and impose a blanket siege, he said.

"We are quite worried that if the Castello route is totally cut off, more than 300,000 civilians will starve and be under huge pressure," he said at the coalition's headquarters in Istanbul.

"Most of the humanitarian supplies are coming through this route. The regime is trying its best to besiege the city."

Rebels on Monday launched a fierce offensive to reopen the Castello Road after it was severed by regime forces.

Abdeh said Russian air power was assisting the Syrian regime while Assad's other ally Iran was "basically managing, controlling, overseeing the military operation in Aleppo" on the ground.

Aleppo has been divided between government forces in the west and rebels in the east since mid-2012 and is a key battleground.

Civilians have already reported shortages of food and fuel in the city's east, with local market stalls sparsely stocked and prices rising.

Osama Taljo, a senior member of the National Coalition from Aleppo, ridiculed a post-Ramadan truce announced by the Syrian army, saying it was simply escalating fighting and using new weapons like cluster bombs and phosphorus.

He said there were 100,000 women and children at risk in Aleppo while the international community "stands idly by". "We are shocked by the international reaction," he told an earlier news conference in Istanbul.

The United Nations says nearly 600,000 Syrians live in besieged areas of the country, most surrounded by government forces, although rebels also use the tactic.

Abdeh told AFP that Assad, Iran and Russia were working to create a "new military reality" in Syria that would enable them to impose a political solution.

"The friends of the regime are committing everything they have to help the regime, while our friends are not as committed in this regard," Abdeh said.

"I do not see a real political will in the international community to reach a political solution in Syria."

He said this could doom the Geneva-based peace process to find a political settlement, which has been deadlocked since late April when the last round ended.

"Without political will, what is happening in Geneva is just a PR exercise, nothing more than that.

"The current environment is not conducive to a successful process in Geneva."

After repeated attacks in Europe claimed by Islamic State (IS) jihadists who still control key areas in Syria, Abdeh warned that Syria's war directly impacted security in the West.

"If they are not active in reaching a political solution in Syria, the whole of Europe will pay a heavy price.

"The Middle East and Europe will not be safe if the fire in Syria is not extinguished as soon as possible," he said.

With US Secretary of State John Kerry due to make another trip to Moscow this week, Abdeh expressed disappointment with the outcome of US contacts with Russia over Syria.

"We hoped such (US-Russia) cooperation would help... in terms of Russia putting pressure on the regime. So far this has not been achieved," he said.