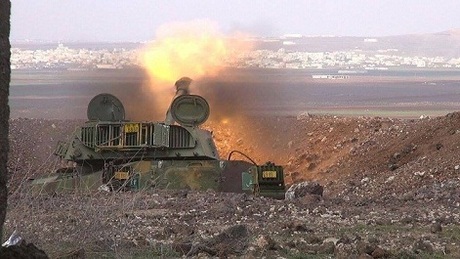 Hizbullah on Thursday bombarded the posts of the extremist Islamic State group in the outskirts of the eastern border town of al-Qaa, inflicting casualties, Hizbullah's Military Media reported.

It said the party fired heavy machineguns, artillery and multiple rocket launchers after detecting IS movements and gatherings in the al-Kahf area.

On Wednesday, Hizbullah destroyed a bulldozer for the al-Qaida-linked al-Nusra Front in the outskirts of the northeastern border town of Arsal. The bulldozer was carrying out reinforcements in the area of Wadi al-Khayl when the fighters destroyed it.

Artillery shelling by the Lebanese army had on Tuesday destroyed al-Nusra's posts in the Wadi al-Khayl and Khirbet Younin areas amid army shelling of the outskirts of Arsal, Ras Baalbek and al-Qaa.

The army has been shelling the outskirts of the three towns for several days now.

Troops have been on high alert since the unprecedented suicide bombings that hit the Christian border town of al-Qaa in late June.

Militants from IS and al-Nusra are entrenched in rugged areas along the undemarcated Lebanese-Syrian border and the army regularly shells their posts while Hizbullah and the Syrian army have engaged in clashes with them on the Syrian side of the border.

i see you're keeping count, good. may they reach the very end of that series.

everything about you is despicable.