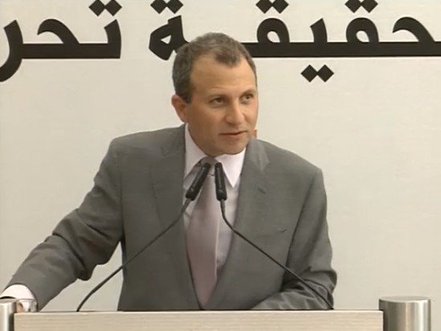 Free Patriotic Movement chief Jebran Bassil stressed Tuesday that the FPM insists on the appointment of a new army chief and called for respecting sectarian balances in the presidential vote.

“We support the appointment of a new army chief and we're against extending the term of the incumbent commander in an illegal manner. It is not impossible to agree on a new commander,” said Bassil after the weekly meeting of the Change and Reform bloc in Rabieh.

“We insist on the appointment of a new army commander and we will have a response” should there be a term extension, the FPM chief warned.

“Last year they said that the problem was that the proposed candidate was General Aoun's relative but what is the problem this year?” Bassil asked, referring to Chamel Roukoz, the former commander of the Commando Regiment and FPM founder MP Michel Aoun's son-in-law.

“The army has officers that are capable of assuming its command,” Bassil added.

On July 31, a media report said the FPM intends to turn Prime Minister Tammam Salam's cabinet into a “caretaker cabinet” should the term of Army Commander General Jean Qahwaji be extended by another year.

“Amid the circulated reports about the inclination of Defense Minister Samir Moqbel to extend the army chief's tenure, FPM officials have informed the premier that the movement intends to force the cabinet to act in caretaker capacity should Qahwaji's term be prolonged,” An Nahar newspaper quoted unnamed sources as saying.

The sources revealed that the FPM leadership is accusing Moqbel of resorting to “double standards” seeing as “a new chief of staff will be appointed while the army chief's term will be extended.”

The term of the chief of staff, Maj. Gen. Walid Salman, ends in August while that of Qahwaji expires in September. Qahwaji's retirement had been postponed in September 2013 and his term was instead extended for two years.

Turning to the issue of the stalled presidential vote, Bassil emphasized that the FPM will only accept a president elected in a manner that respects the 1943 National Pact, which is an unwritten agreement that set the foundations of modern Lebanon as a multi-confessional state.

“We are not clinging to General Aoun as a person and we are ready to endorse another candidate when people choose someone else,” the FPM chief added.

He also noted that his movement will not accept another extension of the parliament's term or holding the next parliamentary polls under the 1960 electoral law.

The voice of democracy himself as is evident in his recent firing of any opposing views within his own party. He is the one who said " I will not tolerate any opposition within the FPM".

How the hell did you come to the conclusion that the Shiites are the majority? Have you been talking to Hassin? His notion of history is so warped he probably thinks that Shiites were here before the Canaanites. That's why he's confiscating Maronite church lands in Jbeil like he did in Dahieh. The concept of Shiites majority is ideology rather than science. Studies and surveys have a more realistic view of the demographic makeup of Lebanon:

Imbassil...the "Little Hitler" known for his totalitarianism and high corruption!!!

Bassil's father was a very very rich man, a real estate mogul. He left Bassil more than 50 beach properties in Batroun alone. However the 30 other properties in Byblos, Bassil worked hard for them on his own. Bassil is a self-made man who got to where he is today based on handwork, merit, and honesty. Bassil is a non-traditional 'politician' who broke the mold of Lebanese traditions and discovered both oil and gas and 3G in Lebanon.

He is also accredited with drowning the country in total "light" 24/7 through the $1.5 billion deal of the century and the environment friendly Fatima Gul power generation ships.