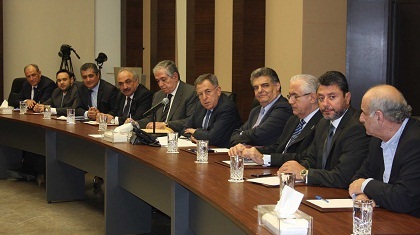 “Sayyed Nasrallah has the right to cling to General Michel Aoun's nomination but this right does not entitle him to impose him as a sole presidential candidate,” said the bloc in a statement issued after its weekly meeting.

Nasrallah had on Saturday hinted that Hizbullah does not mind the re-designation of al-Mustaqbal Movement leader ex-PM Saad Hariri as premier in return for the election of Aoun as president and Speaker Nabih Berri as head of parliament.

“The issues of electing a president, electing a speaker and naming a prime minister are national issues par excellence and not issues for each religious community or sect to monopolize,” Mustaqbal said in its statement.

“The Constitution clearly stipulates this and the conferees have reaffirmed it during the latest national dialogue sessions,” it noted.

“Those obstructing the (presidential) electoral process are well-known – Hizbullah, the Free Patriotic Movement and their allies – and it is an underestimation of people's intelligence to think that anyone inside or outside the country believes the arbitrary accusations against al-Mustaqbal Movement and the Kingdom of Saudi Arabia” in this regard, the bloc added.

Mustaqbal should take this matter up with hezbollah in their next 56th scheduled dialogue session.

you sound a bit extremist, i would say even more than Rifi the one who invited arabs to invade Lebanon.

7 minutes ago Hizbullah and al-Mustaqbal stressed during their 30th dialogue session the need to "speed up the drafting of the new electoral law."

i never said that Lebanon isn't an arabic country, but your boss Rifi encouraged arabs to bomb the country..... while HA is defending it from his cousins and yours.

"The Sunnis in Lebanon are not falling for it anymore" say Mustaqbal.. you half yankee, a quarter Saudi and a quarter Lebanese.

Caporal is on the payroll of the Farsis since 8 years. He is their khadim in each and every way.

They are doing everything to destroy the Constitution and the National Pact to impose by force a Mutelateh!