Berri: Country to Face Crossroads by Year's End if No Agreements 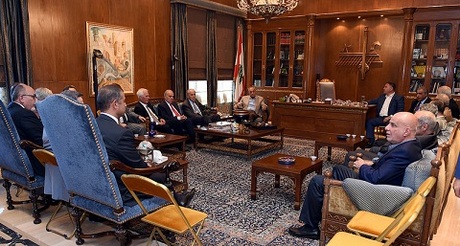 Speaker Nabih Berri warned Wednesday that the country would face a “crossroads” at the end of the year if the rival political parties do not agree on solutions to the current crises.

“The country's situation at the end of the current year will be at a crossroads if we do not agree on appropriate solutions for the pending issues,” the MPs who visited Berri in Ain el-Tineh quoted him as saying.

“The situation cannot withstand further procrastination and decay in state institutions, which are reflecting negatively on citizens and aggravating their daily burdens while also affecting the general situations and order in the country,” the speaker added.

“I reiterate that we need to expedite the agreement on a comprehensive solution that starts with the presidency, seeing as the element of time is not in anyone's favor,” Berri cautioned.

He also stressed anew that the parliamentary polls will be held on time and that the legislature's term will not be extended for a third time.

“This requires us all to speed up our efforts to reach an agreement on the electoral law,” Berri said.

Berri has recently proposed a so-called package deal that involves holding parliamentary elections under a new electoral law before electing a new president and forming a new government.

Should the parties fail to agree on a new law, the parliament's current extended term would be curtailed and the elections would be held under the 1960 law which is currently in effect, Berri says.

Lebanon is already destroyed thanks to this caporal.

The badies live longer than the goodies.