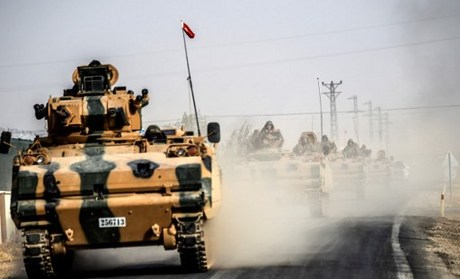 Turkey on Tuesday sent more tanks into Syria and sternly warned a Kurdish militia to withdraw from frontline positions, a day after pro-Ankara Syrian opposition fighters captured a key border town from jihadists.

The tanks joined those which crossed the frontier on Wednesday in the so-called Operation Euphrates Shield, which Turkey says aims at ridding the northern Syrian border area of both Islamic State (IS) extremists and Kurdish militia.

Turkish President Recep Tayyip Erdogan said on Wednesday that the offensive had expelled IS from the Syrian town of Jarabulus, and pro-Ankara rebels reported the jihadists had retreated south to the town of al-Bab.

But Defense Minister Fikri Isik warned the Kurdish People's Protection Units (YPG) militia -- who also had designs on Jarabulus -- to move back east across the Euphrates or also face intervention from Turkey.

The new contingent of tanks roared across a dirt road west of the Turkish border town of Karkamis, throwing up a cloud of dust in their wake before crossing the border, an AFP photographer said.

They were then followed by around 10 armored vehicles.

The operation, the most ambitious launched by Turkey during the five-and-a-half-year Syria conflict, has seen Turkish special forces deployed on the ground and jet fighters striking IS targets.

They are supporting a ground offensive by hundreds of Syrian rebels who on Wednesday marched into Jarabulus and a neighboring village after meeting little resistance.

It was not immediately clear if the deployment of the new tanks on Thursday was aimed at securing Jarabulus or helping the rebels move into new territory.

But a Turkish official said on Wednesday that Ankara would "continue operations until we are convinced that imminent threats against the country's national security have been neutralized."

The well-connected columnist of the Hurriyet daily, Abdulkadir Selvi, said the aims of the operation included creating a security zone free of "terror groups" and limiting the advances of Kurdish militia.

He said 450 members of the Turkish military had been on the ground on the first day of the offensive but this number could rise to 15,000.

The Hurriyet daily, citing military sources, said 100 IS militants had been killed in the offensive. It is not possible to independently verify the toll.

Jarabulus, a small town on the west bank of the Euphrates a couple of kilometers (miles) south of the border, had been held by IS jihadists since the summer of 2013.

Turkey has emphasized that the offensive was also aimed at the YPG, who Ankara sees as a terror group bent on carving out an autonomous region in Syria.

Ankara's hostility to the YPG puts it at loggerheads with its NATO ally, the United States, which works with the group on the ground in the fight against IS.

But U.S. Vice President Joe Biden, visiting Turkey on Wednesday, made clear that Washington has strictly told the YPG not to move west of the Euphrates after recent advances or risk losing American support.

Turkish Defense Minister Fikri Isik told NTV television there was so far no evidence of any withdrawal and Turkey reserved the right to strike the YPG if it failed to move.

"If this withdrawal doesn't happen, Turkey has every right to intervene," Isik added.

"They have not yet withdrawn... Turkey will be following, moment by moment," Isik said, adding the withdrawal was promised within a week.

A spokesman for the U.S.-led coalition against IS tweeted that the "main element" of the Syrian Kurdish forces had already moved east although some remained for clean-up operations.

Ankara has in the past been accused of turning a blind eye to the rise of IS but hardened its line in the wake of a string of attacks -- the latest a weekend bombing on a Kurdish wedding in the city of Gaziantep that left 54 people dead, many of them children.

The Jarabulus operation proceeded at lightning speed with the town captured from IS just 14 hours after it was launched.

The speed of the advance stood in stark contrast to the long, grinding battles it had taken for Kurdish forces to recapture towns from IS in northern Syria, such as Kobane and Manbij.

Television pictures showed the Syrian fighters walking into an apparently deserted and abandoned Jarabulus unchallenged and newspapers published pictures showing that the rebels even had time to take selfies along the way.

The apparent efficiency of the operation also marked a major boost for the Turkish army whose reputation had been badly tarnished by the failed July 15 coup against Erdogan staged by rogue elements in the armed forces.

but @Mystic thinks the Turkish army ran out of tanks:

"Mystic 12 hours ago
So Turkey still have tanks after the failed coup."

hehe yep it's the same empire and its dreams that fell in Aleppo according to the terrorist nassrallah;)

Same old, same old... Eagledawn quotes comments out of context & replies to himself with "lol" etc by logging in & out with diff names.

When does iceman-terrorist-liberty-normajean etc make their appearance?

long time no see @the_roar! what have you been doing for the last 6 months apart from posting daily under 50 different daily aliases and getting banned only to come back the following day with another session of new names but same content, same comments, same old same old.

I was banned? if so how am I posting with my online name?
Arrogant & delusional best describes your line of thinking, be it politics or addressing other posters.

It seems the failed coup has handed the Kurds a death sentence.

The backers of the coup are the same who backed the Kurds....This has nothing to do with ISis ...

hezb/iran were able to take out israeli merkava, dont tell me the vile turks have better tanks then the israelis. lets see what science experiment mother russia and mr khamenei can make out of turkish junk.

How does ranking effect the U.N's ability to do its job?

Or the U.N is influenced by rankings?

the night security guard is on duty once again

I haven't posted in a long time, but who said I havn't checked out the articles & posts?

No one ever claimed Israel was crushed ....what was claimed was HA slapped them back & hard....makes them think twice about attacking Lebanon like they used to....Try to debate like a grown up 7 stop using childish claims

Why should anyone answer any of your questions when you are unable to answer a most basic question...debate goes both ways & not how tex decides it goes.

don't flatter yourself Tex, I have never used any other name but this

Unlike you I call it as it is & not a paid propagandist like you & your friends on here.

I was the most ardent supporter of the General & the FPM, yet now I loathe them...You see tex I do not have an agenda like you but rather debate what I believe is correct.

You cannot answer a basic question that most already know the answer to..such as the its the UN's job to ensure no nation defies international law..one being invading another nations territory.

Why? because your a paid commentator unable to say the truth.

so you keep on twisting & diverting but please don;t flatter yourself & think I need to use other names to debate with a paid robot like you.