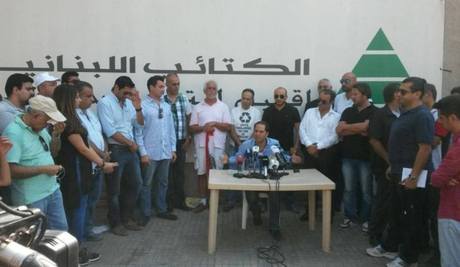 The Kataeb Party and a number of environmental groups announced Sunday a “temporary suspension” of a sit-in that started a month ago outside the Bourj Hammoud garbage landfill, noting that their protest has obliged authorities to revise a controversial waste management plan and to endorse steps based on waste sorting, composting and decentralization.

“The approach of decentralization in waste management has started and no one will be able to stop it,” Kataeb chief MP Sami Gemayel announced at a press conference.

“Day after day, we are proving our determination to continue the battle against corruption,” he said.

Saluting the “30 Northern Metn municipalities that laid the groundwork over the past four weeks by launching awareness campaigns, finding land lots and preparing for the creation of sorting and composting plants,” Gemayel blasted “corruption” in the government's contracts for “waste collection, waste sorting and treatment, the construction of the two landfills, the construction of the breakwater, and the land-filling of unsorted waste.”

“That's why they were insisting on blocking decentralization seeing as it would halt suspicious deals at all levels,” the Kataeb chief added.

“Through our protest, we have broken the siege and the municipalities have started waste sorting,” Gemayel noted, vowing that Kataeb and the civil society groups would “confront anyone who might try to stop municipalities from setting up sorting and treatment plants in their regions.”

“What happened is a first round in a long war and more rounds will follow. We will not let them rest and we will confront corruption and suspicious deals,” the Kataeb leader added.

A spokesman for the environmental groups, Marc Daou, meanwhile said that the decision to suspend the sit-in was taken after several protesters were hospitalized as a result to their exposure to pollution emanating from the landfill and after garbage accumulating on the streets started to pose health and environmental risks.

“We are against the plan that was devised by the coalition of corruption, against the land-filling of the sea, against random garbage dumps and against suspicious deals. We support environmental solutions that would be in the interest of the country and its citizens and we have achieved some progress in our confrontation,” said Daou.

He also vowed to “follow up on all tenders” and “maintain the direct confrontation – from the gates of landfills to the gates of the Council for Development and Reconstruction.”

The government has vowed to shorten the so-called transitional period in its waste management plant from four years to one year. Under the new agreements, a committee comprising lawmakers, municipalities and civil society representatives would also oversee the transition to waste management decentralization.

Kataeb and environmental groups had accused authorities of seeking to “land-fill the sea” with unsorted and unrecycled garbage in a manner that poses environmental and health risks and violates the Convention for Protection of the Mediterranean Sea against Pollution.

The Bourj Hammoud Municipality had also prevented garbage trucks from accessing a temporary storage site in the area, accusing the government of failing to respect the agreements that preceded the emergency plan.

The closure of the temporary storage site has prompted the Sukleen waste management firm to suspend garbage collection in several areas in Mount Lebanon and Beirut, which has resulted in the accumulation of trash on the streets.

The country's unprecedented waste management crisis erupted in July last year when the country's central landfill in Naameh was closed amid the government's failure to find alternatives.

Experts have long urged the government to devise a comprehensive waste management solution that would include more recycling and composting to reduce the amount of trash going into landfills.