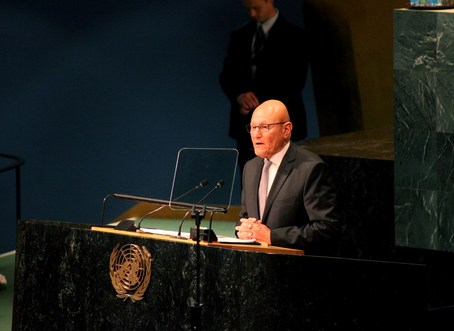 Prime Minister Tammam Salam on Thursday urged Lebanon's friends to help in ending the long-running presidential vacuum, noting that the solution “is not in the hands of the Lebanese alone.”

“The sharp regional polarization has turned into an open conflict across the region. Therefore, realism obliges us to admit that the solution to the presidential void problem in Lebanon is not in the hands of the Lebanese alone,” Salam told the annual meeting of the U.N. General Assembly in New York.

“I send out an appeal to all of Lebanon's friends and to all those who are keen on preventing the emergence of a new tense zone in the Middle East to help Lebanon elect a president in order to restore the balance of our state institutions and protect the Lebanese model of coexistence,” the premier added.

Turning to the refugee crisis, Salam underlined that "the Syrian presence in Lebanon is of a temporary nature."

“We declare that our country is not a country of permanent asylum and that it is a final country for the Lebanese exclusively,” the PM emphasized.

Earlier in the day, Salam stressed that Lebanon will not accept the “integration” of Syrian refugees into the Lebanese society while reassuring that security in the country is “under control.”

“We won't accept the integration of the refugees in Lebanon and the priority is for reintegrating them in their country,” Salam said in an interview with Al-Arabiya's al-Hadath news channel.

Separately, the prime minister warned that Lebanon faces the threat of “collapse” should the presidential vacuum continue.

He however reassured that the security situation in the country is “under control,” noting that “no major security incidents have been recorded since a long time.”

“All security agencies are united to contain any tensions and prevent any security deterioration,” he added.

On Monday, Salam had urged the United Nations to devise a plan for the “safe return” of Syrian refugees from Lebanon to their country.

“This huge and sudden influx of refugees is posing dangerous risks to our stability, security, economy and public services,” said Salam during the first-ever U.N. summit on refugees in New York.

“This detailed plan must be devised within three months and it must detail the transportation needs, the places of departure and the financial cost,” Salam added.

“Collecting the funds needed for this plan must begin immediately so that it can be quickly implemented once the circumstances allow,” he urged.

Five years into the Syria conflict, Lebanon hosts more than one million refugees from the war-torn country, according to the United Nations.

More than a third live in the Bekaa valley near the Syrian border.