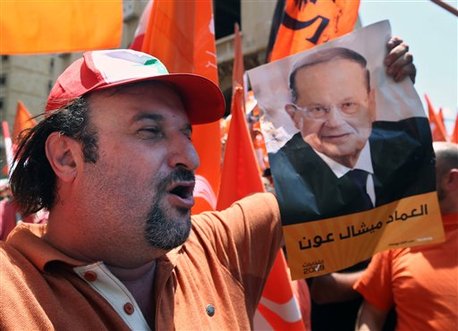 Free Patriotic Movement sources stressed that they have completed the preparations for the street rallies and are waiting for the start signal from MP Michel Aoun, As Safir daily reported on Monday.

"The plan to kick off street rallies and take action on the ground has been completed, and putting it into implementation awaits the signal of Aoun," the sources told the daily on condition of anonymity.

They added that Aoun will take his decision to launch the rallies following a session designated to elect a president, which they said is the breaking line between two stages.

The Change and Reform announced earlier that it has started mobilizing for street protests on September 28 and October 13 as part of its escalatory steps that are aimed at pressing the other parties in the country to “abide by the National Pact.”

FPM chief Jebran Bassil has threatened that the FPM would “topple the government” through street protests if the other parties do not heed the movement's demand regarding “partnership” and the National Pact.

The 1943 National Pact is an unwritten agreement that set the foundations of modern Lebanon as a multi-confessional state based on Christian-Muslim partnership.

I wish they go to the street to see the number of remaining idiots.

Where is the car bomn when you need it the most?

Loving the manipulations exiled.movaten, you get bonus points.

...and God bless him for being a lackey to the Butcher to Ebola and Iran...

They will undoubtedly topple the government into submission....yawn

It's the truth exiled.movaten. Unlike you and your thousands of lies.