Report: Berri-Jumblat Disfavor Aoun for Presidency, Tripartite Alliance with Franjieh Does not Exist 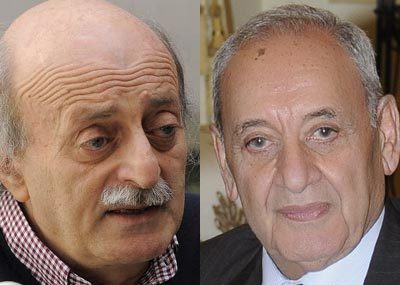 Positive results with regard to the nomination of MP Michel Aoun for the presidential post are not to be expected from Speaker Nabih Berri and Progressive Socialist Party leader Walid Jumblat, and a tripartite alliance with Marada Movement chief MP Suleiman Franjieh is not in the making, An Nahar daily reported on Friday.

Sources who held meetings with Berri and Jumblat earlier, said they observed “discouraging impressions” as for a suggestion to support Aoun for the presidency, the daily quoted the sources on condition of anonymity.

“Even though they (Berri and Jumblat) dealt flexibly with the motives of al-Mustaqbal Movement chief ex-PM Saad Hariri to re-float all the options (to fill the presidential vacuum) including the option of nominating Aoun,” but they do not encourage the MP for the top Christian post.

On reports that claimed that a tripartite alliance between Berri, Jumblat and Franjieh was 'in the making' to push the later for the presidential post, the sources stressed: “They (Berri and Jumblat) realize the caveats of such an alliance which would be interpreted as targeting Hariri. At the same time they do not seem in a positive position to the option of re-floating the nomination of Aoun.”

Hariri held talks Thursday evening with Berri as part of his latest drive regarding the issue of the presidency.

He also met with Franjieh, his declared presidential candidate, in the wake of his return from a several-week foreign trip.

Hariri has also met with Kataeb Party chief MP Sami Gemayel and Progressive Socialist Party leader MP Walid Jumblat and, according to MTV, he is scheduled to meet in the coming hours with Aoun and Lebanese Forces leader Samir Geagea.

Thugs of a feather flock together. So shocked.

that's exactly what hezbollah and the FPM are.