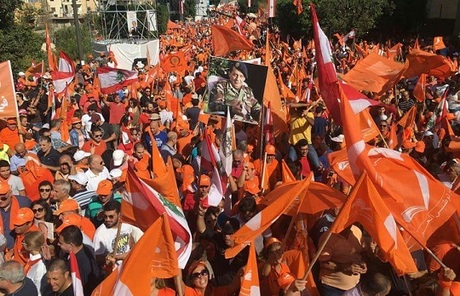 Supporters of the Free Patriotic Movement flocked Sunday from all Lebanese regions to an area outside the presidential palace in Baabda to mark the anniversary of the 1990 ouster of FPM founder MP Michel Aoun from the palace at the hands of Syrian forces.

This year's rally was held under slogans urging respect for the 1943 National Pact, which is an unwritten agreement that set the foundations of modern Lebanon as a multi-confessional state based on Christian-Muslim partnership.

Supporters were seen carrying FPM flags and pictures and slogans supportive of FPM founder Aoun, whose chances to be elected president have surged in recent days.

Aoun served as the head of one of two rival governments contending for power in Lebanon from 1988 to October 1990.

The FPM, which has the biggest Christian bloc in parliament, has suspended its participation in cabinet sessions and national dialogue meetings over accusations that other parties in the country are not respecting the National Pact.

The supporters of Aoun's presidential bid have also argued that he is more eligible than Marada Movement chief MP Suleiman Franjieh to become president due to the size of his parliamentary bloc and his bigger influence in the Christian community.

Berri, who chairs the national dialogue, suspended the meetings after the Change and Reform bloc said it would boycott future sessions.

Is the FPM blackmailing Nassrallah?

I agree: why doesn't Nassrallah bring out the Shia masses and get rid of this National Pact (Taif Accord) that disenfranchises the Muslim majority via Article 24 and, since it was never written down, except in Article 24, nobody ever voted on it? Was Article 24 ever voted on?

All the Lebanese are rightfully rejoicing the ouster of Aoun. Too bad that didn't last... Riz2allah 3a ayyem when Aoun wasn't in the country dragging it through the mud...

it is like the wh... who professes about honesty