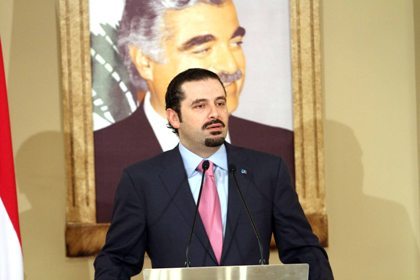 Al-Mustaqbal Movement chief Saad Hariri was not summoned to Saudi Arabia against the backdrop of nominating MP Michel Aoun for the presidency, but has headed to the Saudi capital to attend to the financial and administrative crises at his companies, al-Mustaqbal daily reported on Monday.

Sources close to the ex-PM told the daily that Saudi Arabia did not summon Hariri to inform him of “reservations as for his nomination of founder of the Free Patriotic Movement.”

“A Saudi envoy will visit Beirut very soon to give blessings to the initiative made by Hariri” remarked the sources on condition of anonymity.

“The Saudi position with regard to the nomination of Aoun is not negative. Hariri would not have made a declaration of support if it was not under a Saudi cover,” they added.

The daily added that after a long talk and assurance that the settlement was Lebanese par excellence, the sources pointed out that there is a “Saudi-Iranian-Russian-American agreement to elect Aoun.”

“Delegates from Gulf states and Western countries might visit Lebanon in the next few days to support the Hariri-Aoun settlement,” they added.

With Aoun's good looks and Hariri's brains, Lebanon will be more advanced than Switzerland and the best country in the Middle East after the Islamic Republic of Iran.

Saudi Arabia and Hariri are the only two super powers working for Lebanon interests at the moment. The rest......pfffft.

I always said that Hariri is a good honest man and is Lebanese first and foremost.

Democracy in Lebanon has a different translation. 5 to 6 (mafia) families decide on :(who , what, why, when and how ) Lebanon and Lebanese will be ruled.
One should admit, they do it thoroughly by taking time ( years) consulting each other.
For them that is democracy. But Lebanese people are not stupid , on the contrary! they found a solution, gradually they are leaving the country, they started ages ago......the poor and simple minded ones remain.

Historical mistake that will highly regretted

Nader and Ghattas are incompetent people

Same for Geagea who surrounded himself by the Riachi climber...

“A Saudi envoy will visit Beirut very soon to give blessings": don't let them in, they are like the zionists, they only carry strife, disputes, crimes, terrorism and wars, it's in their blood.

btw, we all know that Hariri and most of his clan are of origen Saudi, but one have to be loyal to the country that gave them refuge and not to allow interference... shameful.

@humble: do you watch Israeli TV like your friend!?

I plead with you to never stop posting. Your message to humanity is needed and required even though you are not aware of it.

I'm excited by this! Lebanon's first political president in a long time.

sounds like you have a chip on your shoulder.