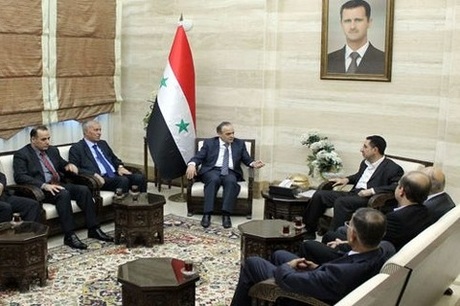 Talks tackled “the ties between the two countries and means to improve them in the economic fields, especially industry and commerce,” Syria's official news agency SANA said.

The Syrian premier explained “the phases of the terrorist war that Syria is being subjected to and the systematic destruction that has targeted the economic sectors, especially industrial zones, factories and lines of production,” SANA said.

“He clarified that the Syrian government is working, according to a new strategy, on rehabilitating the productive agricultural, commercial and industrial sectors,” the agency added.

Hajj Hassan for his part stressed that “Syria and Lebanon share the same fate in resisting the schemes that are being planned for the region to serve Israel and its objectives,” underlining “the importance of exerting efforts to improve the economic ties between the two countries, especially in the industry sector.”

Hizbullah's intervention in the Syrian conflict alongside regime forces has helped Damascus achieve several military victories and allowed the party to clear most of the Lebanese-Syrian border region from rebels and jihadists.

Since 2013, the Lebanese, Iran-backed party has sent thousands of combatants -- between 5,000 and 6,000, according to the expert on Hizbullah Waddah Sharara -- to help the regime fight both rebels and jihadists. They send 2,000 fighters at a time in rotation, Sharara says.

Experts say Hizbullah has lost 1,000 to 2,000 fighters in the conflict, including senior commanders.

Syria is more in accord than Israel than the arab world..