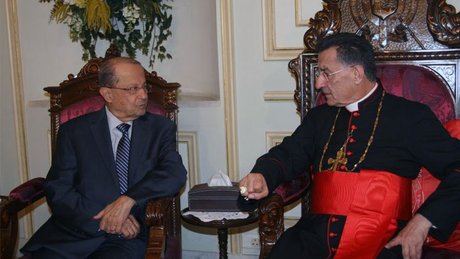 Al-Rahi voiced his stance in a joint statement that was issued after talks in Bkirki with Free Patriotic Movement founder and leading presidential candidate MP Michel Aoun.

“General Aoun briefed Patriarch al-Rahi on the latest developments in the presidential file ahead of the Oct. 31 electoral session,” the statement said.

“Patriarch al-Rahi expressed his relief over the realization of what he had long called for, which is that the political and parliamentary blocs declare their stances on nominations,” it added.

“This guarantees that the scheduled electoral session will be held and a president whom people have waited for so long will be elected,” the statement said.

Dear Batrak
This caporal is a traitor. Beware of how he will destroy the Christians.

good thing Aoun did not get his pict and force the Batrak to kiss it....